Jodi says there are no issues if her next project would be a character role or lead role. 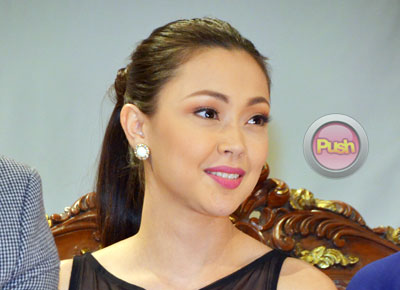 After making history and changing the landscape of noontime viewing, “kilig serye” Be Careful With My Heart is set to air its “happy ever after” come November 28.
During the Be Careful With My Heart Happy Ever After grand press conference, the cast of the two-and-a-half-year-show became nostalgic over their show’s impending end. But the same could not be said for lead star Jodi Sta. Maria, who’s playing the role of the ever colorful Maya dela Rosa.
Although she admits to having mixed emotions over it, she emphasized that “I think nai-prepara ko na rin naman ang sarili ko na lahat naman ng nagsisimula ay may katapusan. Pero siyempre nakaka-miss dahil for two years ito ‘yung ginagawa ko.”
But while many could attest that Jodi has really gone a long way as far as being a lead star is concerned because of Be Careful, she confessed that she has yet to receive an offer for a new project.
“Wala pang naka line up na gagawin after Maria Leonora Teresa kasi nasa mga sinehan parin siya. 100 cinemas pa rin on our second week na,” she said of her horror film directed by Wenn Deramas.
However, recently Jodi’s name cropped up on various reports about her being supposedly among the cast of the rumored remake of hit teleserye Pangako Sa ‘Yo, which would reportedly star Kathryn Bernardo and Daniel Padilla.
Contrary to speculations though, the 32-year-old actress clarified that she is not playing the role of Amor Powers, which was once portrayed by iconic actress Eula Valdez.
“Gusto ko lang pong klaruhin kasi ‘yun nga po narinig ko rin na naglabasan na sa akin napunta ‘yung proyekto, hindi po. Dahil alam po ng ABS-CBN na gusto ko pong magpahinga pagkatapos ng Be Careful With My Heart,” she stated.
This is not to say though that she doesn’t want to work with reported cast Kathniel, as she underscored that she actually admires the phenomenal love team.
“Bakit naman hindi? Natutuwa ako sa dalawang batang ‘yun dahil sa kabila ng fame na meron sila ngayon they have remained humble. Considering their stature pero pinaunlakan nila ang Be Careful With My Heart na sumama sila for a limited engagement,” said Jodi.
Kathryn and Daniel recently became part of the afternoon kiligserye when they breathed life to the teenage years of Manang Fe as well as her love interest Mang Anastacio.
With the reported remake’s cast remaining unannounced, speculations continue to stir online. But the question remains as to whether or not the role was offered to Jodi in the first place, a question which she evaded to answer by saying, “Alam naman kasi ng ABS na I want to take a rest first, I want to take a break so alam kong may naka line up pero kailangan ko pang i-meet sila.”
Since she has yet to have a solid project to appear on after her show, will she have any issue if say she ends up doing support roles once again after Be Careful?
“Alam niyo sa totoo lang hindi naman talaga issue sakin kung character role or lead eh. Sabi ko nga eh nanggaling ako sa support na okay na okay ako.Kung naging lead man po ako ngayon, blessing ‘yan mula sa Panginoon at bonus ko para sa karera ko. So wala pong problema kung bumalik po ako sa support,” she ended.
Celebrity