Jasmine Curtis underscores that she’s not out to come between Kathryn Bernardo and Daniel Padilla. 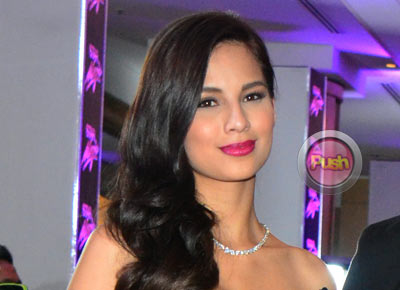 Finally breaking her silence since the controversial recording speculating about her ties with Daniel Padilla went out, Jasmine Curtis confessed that they did exchange a couple of messages lately.
But she immediately clarified in an interview with ABS-CBN News recently that their conversations were nothing romantic but merely friendly. "During that time, I was going through a bit of a down moment, because I was scared something would happen to my dad. He was hospitalized," shared Jasmine, who added that she only met Daniel on the set of their upcoming Metro Manila Film Festival biopic entry Bonifacio Ang Unang Pangulo.
"The people who were there saw how affected I was and how sad I was," she continued pertaining to the operation which her father James Ernest was supposed to undergo for what the she and sister, Anne Curtis called a “healthier heart.”
It was due to her father’s then sensitive condition when the exchange of text messages happened wherein Daniel, according to Jasmine, expressed concern for her father’s operation.
"He (Daniel) texted me to ask about my dad. All our conversations revolved around how my father was doing, ‘Kamusta 'yung operation niya.’ Iyon, that's where it ended," she said.
"Really, everything revolved as if we were friends. I thought nothing else of it. Nothing was meant from the texts, aside from concern, because they saw how fragile I was regarding my dad and his health," Jasmine reasoned.
Jasmine said that she is not out to destroy the bankable love team of the Teen King with Teen Queen Kathryn Bernardo. "I don't want to interfere with his relationship with Kathryn, and I don't want to be labeled as anything else but a friend to both of them," she said. "I respect their relationship and I would never try to get in the way of it."
While there has been no confirmation that she was the one being referred to by the heartthrob in the recorded conversation, fans of the love team collectively known as Kathniel, already went up in arms against Jasmine. But not all their fans hated her as she related, "I think it's good also because even their own supporters, the Kathniel fans, are also understanding my situation na, you know, wala naman talaga akong ginawa or I didn't show any signs that I provoked anything.
"Some of them are there also to take care of me and my name and they know where to stand. I understand that they're also hurt because, of course, they’re very protective of their idols. But, you know, majority of them naman talaga know how to act upon such a controversy."
Even if some already jumped to the conclusion, Jasmine said she never really assumed that is was her that was being referred to on the recording after hearing the audio. "I didn't hear it properly, it was very muffled. So ano na lang... Parang, okay, 'People are thinking it's me.' Sige, kayo na lang bahala kasi ayoko din naman mag-assume bilang I saw everything as friendship lang naman ang na-insinuate ko. I mean, everyone has their own opinions," she explained.
Like what The Buzz hosts Toni Gonzaga and Boy Abunda pointed out in their Sunday episode, Jasmine likewise expressed anxiety over the fact that Daniel has been betrayed since “whoever he was opening up to or talking to, I'm sure it was someone that he trusted, so it kind of hurts, that this would come about."
Celebrity