Daniel to those trying to destroy him: ‘Galingan niyo!’ 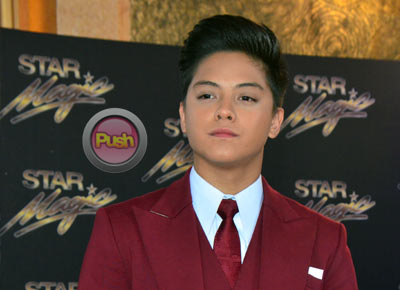 A few days ago a mysterious video recording of guys casually talking to each other emerged online and many netizens immediately speculated that one of the voices belonged to Teen King Daniel Padilla.
The one-minute video was initially dark which many took to mean that it was recorded secretly. While a good portion of the interview was inaudible, certain portions of it were clear. Including the part when the supposed Daniel gave negative comments about a certain person whom he said supposedly looks like American punk rock band Green Day’s vocalist Billie Joe Armstrong.
Another part of the conversation had the supposed Daniel talking about exchanging messages with a certain person. Many thought that the person that the rumored Daniel was talking about was a woman that he’s supposedly making moves at.
The speculation was brought about by what the supposed Daniel said in the video that he is “kinikilig” while talking to “her.”
Before the video ended, two names were mentioned by the supposed Daniel, there’s a “Patrick” and a certain “Sam.”
In addition, the video had the supposed Daniel being thankful that “Patrick” had already left where they are for finally no one would bug him anymore because he happens to be a friend of “Sam.” While the supposed Daniel’s statements weren’t clear it was immediately given a malicious interpretation by many netizens.
There were rumors that the “Sam” mentioned in the video was Sam Concepcion while the woman, who supposedly is making the reported Daniel happy, was the former’s girlfriend Jasmine Curtis.
What further bolstered the insinuation were the recent photos of Jasmine and Daniel while filming on the set of their upcoming Metro Manila Film Festival entry Bonifacio: Ang Unang Pangulo. Sam, in a taped interview aired on The Buzz on Sunday, was evasive about the issue citing that “It’s not for me to answer” but he reiterated that he and Jasmine are “okay.”
With one half of the phenomenal love team Kathniel composed of Daniel and Kathryn Bernardo facing a controversy, a lot of their fans immediately rallied to their defense with many of them supposedly initiating the bashing of Jasmine on various social media platforms when the rumor began.
Jasmine’s sister, Anne Curtis recently defended her sister from one of the basher who called the younger Curtis a “slut.” Meanwhile, the She’s Dating The Gangster actor’s mother, Karla Estrada also wasn’t able to mask her anger on her Twitter account recently over this new tirade against her son. Daniel, for his part, finally spoke up and just shrugged off the rumor in a taped interview aired on the same Buzz episode.
“Gusto ko lang sabihin, tuloy niyo lang ‘yan! Galingan niyo!” he said.
About three days ago though, the former Got To Believe actor seemingly became nostalgic on his Twitter account about the overwhelming support that his fans gave him amidst the controversy. Kathryn Bernardo meanwhile has yet to comment on the controversy but she recently posted a telling photo on her Instagram account which to many, appeared that all is well between her and Daniel.