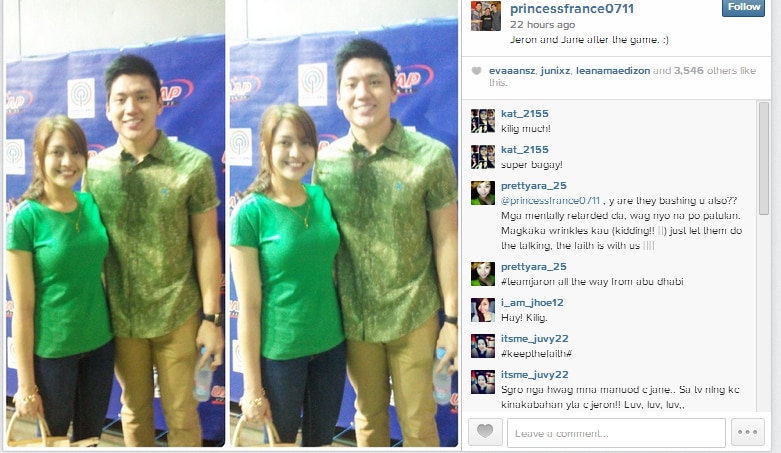 Jane Oineza showed her support for La Salle Green Archer player Jeron Teng by coming to the UAAP live game last Wednesday, September 10, 2014. Jeron took to Twitter to express his gratitude to the teen actress for her presence in the game at the Araneta Coliseum.
"Really happy that you came and watched our game despite your busy sched. @itsJaneOineza," Jeron tweeted.
Jeron also defended Jane from some fans who are purportedly blaming Jane over the loss of Green Archer’s against the UE Red Warriors during the Wednesday game.
"Our loss was on us, the whole team. Nothing else. #stoppointingfingers #gottabounceback. I don’t see how it's the fault of someone who didn't even play and is not a part of the team.  lol,” Jeron tweeted. “We win together, and we lose together. #keepthefaith #positiveattitude," he added.
Jeron recently admitted that he wants to court Jane.  “I want to,” he confessed during his guesting in Aquino and Abunda Tonight.  But Jeron underscored that their hectic schedules might be an issue. “Pero siyempre maraming factors. We are from different worlds kasi," Jeron said.
The La Salle player also admitted in his interview recently in The Buzz that he finds Jane attractive. “Siyempre si Jane mabait naman siya, maganda. Lahat ng qualities [na hahanapin mo] sa babae, makikita mo na sa kanya.”
Jeron also remarked that Jane has his full support. “Jane, I’m very proud of you and I’ll always be here for you lang and number one fan mo ako dito,” he said.