Enchong Dee says he doesn’t care what people say about his relationship. 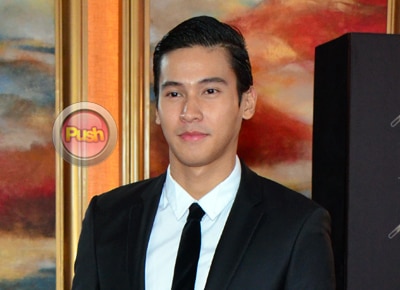 Enchong Dee remarked that he couldn't care less about the comments of his haters after revealing the identity of his girlfriend. To everyone's surprise, the actor brought along his girlfriend to the eighth Star Magic Ball last Saturday and introduced to the press his girlfriend, model Samantha Lewis.
Enchong previously opted to keep the identity of his girlfriend private which sparked speculations that his girlfriend was just "imaginary". Enchong proved them wrong at the ball though there were still some negative reactions to his revelation.
"To be honest wala talaga ako binuksan [na site] nong Star Magic [Ball]. May mga kaibigan din siya na nagsabi na you're in this, you're in that, news, ganyan, ganyan, sabi ko I don’t care, I will go to church on Sunday, so ‘yun talaga ‘yung ginawa ko sabi ko I really don’t care, good or bad reaction, it doesn’t matter," he said in an interview during the rehearsal of the Bida Kapamilya Tour on Tuesday, September 9, 2014 at the ABS-CBN compound.
The actor added, "I think kasi kapag gusto mo ng privacy parang hindi mo rin makukuha eh at wala ding nakikinig so I’ll just give it to them." Enchong remarked that what matters most is that they are happy to be together. "We’re both happy, super happy," he said.
Enchong is set to headline the Bida Kapamilya Tour with the other Star Magic artists in Sydney, Melbourne and Perth in Australia. They will also be touring in Doha and Dubai. Visit starmagic.abs-cbn.com for more details.
Celebrity