PUSH EXCLUSIVE: Daniel Matsunaga on Heart Evangelista: ‘She found the right guy for her’ 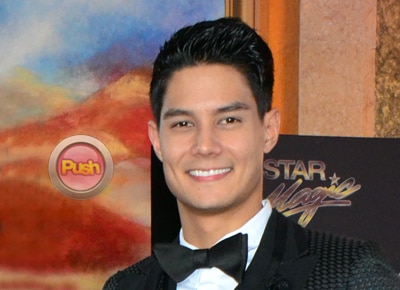 After emerging as the Big Winner in Pinoy Big Brother All In last month, Daniel Matsunaga has been busy with showbiz opportunities popping up left and right. Everyone was in anticipation of whom he would escort down the red carpet during the eighth Star Magic Ball but the Brapanese model-turned-actor chose to bring his sister Vanessa instead. “I didn't have a date because I'm single right now and my sister, she is the best person to bring to the ball because she is the biggest support in my life and that's the person I trust the most right now in the Philippines. She's my family and the only one representing my family here and I'm really, really happy that she is here for me. Anything I do she is always there for me so why should I not bring my sister? She also wants to become artista so it's always good for her to go there with me and see how things work and everything so she's happy,” he shared with Push during his football practice in Taguig city last September 8.
The 25-year-old hunk said there was definitely no awkwardness when he ran into former girlfriend Heart Evangelista and her fiance Senator Chiz Escudero during the ball. “No, we just said ‘hi’ lang. I'm very happy for Heart and Chiz because they are getting married and I know she really worked hard for her whole entire life in showbiz and she found the right guy for her. I met Chiz and sobrang bait [niya]. We even spoke dun sa Star Magic Ball mismo and he even said to me, 'Hey you got so skinny!' Yun I'm very happy for them. It's a blessing that they're getting married and I just wish they put God in front of everything,” he explained.
Daniel said he would like to clarify that there is no reason to make an issue about him and Heart because they have both moved on with their lives after dating for a few months back in 2012. “It's not uncomfortable for me. I'm very happy for them. It's actually reverse of what people are thinking because I'm very, very happy for Heart and Chiz. It's normal eh. Because it's been three years na. It's been matagal na and it's like any other relationship. It's didn't work and move on. It's done so good thing that we're still friends, good friends even though we broke up. So ayun I'm just very happy for her,” he said.
When it comes to his own plans of finally starting his own family, Daniel said he still wants to achieve a lot when it comes to his showbiz career. “Well to settle down I'm not sure yet because I'm just starting. I'll give it maybe ten years,” he said. The former PBB housemate is currently busy with two movie projects, one of which is the Metro Manila Film Festival horror movie franchise Shake, Rattle and Roll.
Celebrity