The Showtime host shows support for Billy Crawford after his recent arrest. 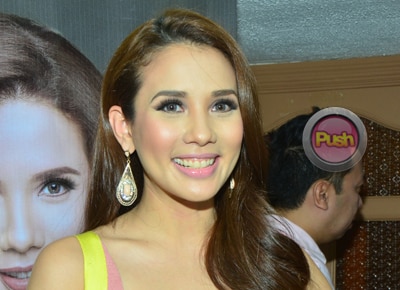 When news broke out that Billy Crawford was detained in the early morning at the Taguig City Police Station, Karylle admits she was concerned for her friend and Showtime co-host whom she has known even before she transferred to ABS-CBN almost six years ago. “I won’t lie that was really difficult but siyempre iba-iba naman kami and I’m just happy nalagpasan namin yun and in anything naman talaga kapit ka lang and everything will come to pass. Actually we haven’t seen him so it’s a bit hard to say. Kami naman we all go through ups and downs and we’re always there for the victories and we’re also there for the moments where you really need each other the most. That’s when if anything should happen to anyone,” she shares during her presscon for Status Salon held last September 10 in Tomas Morato, Quezon city.
The 33-year-old singer says there has been an outpouring of love and support for Billy from everyone from their show. “Siyempre mahirap. Whenever one goes through something everyone goes through it as well so ganun talaga. Siguro mahirap talaga. Yung pressure sa bawat tao mahirap. Minsan nagkakamali, minsan nadadapa pero everyone tries their best naman,” she admits. Karylle says she knows Billy to be a good guy even before they worked together on the same noontime show. “Billy has been my friend ever since sa kabila pa ako and ang masasabi ko mahal na mahal ko yang kaibigan kong yan and mabait siyang tao. Minsan talaga sa buhay may pinagdadaanan tayo. Ano lang, mahirap lang talaga minsan. Si Billy kasi friend ko na siya way, way back sa kabila pa kami. Si Coleen naman although malayo yung age gap namin roommate ko siya sa Showtime,” she adds.
When asked to confirm if rumors are true that the controversial Fil-Am singer will be suspended by the network for his actions, Karylle says she has no authority to confirm or deny. “Hindi naman. Si Billy kasi is in shooting ng Moron 2.5? Ako wala naman akong nabalitaan. I can’t really speak for him or for anyone else but for myself it’s a different demand and a different pressure so we all have our own ways of dealing with it so that’s all I can say. Hindi ko rin naman alam. I can’t really say kasi hindi ko alam,” she says.
Even though fellow co-hosts like Vice Ganda, Anne Curtis and Vhong Navarro being involved in different controversies during recent years, Karylle says she still can’t bring herself to believe in what the media has been dubbing as the “Showtime Curse.” “I believe our words are powerful so whatever you choose to say, that becomes reality. So choose your words wisely. You could choose to believe it or not but I choose not to believe it because I don’t want to be part of anything na will be bring anyone harm.  I believe naman in the goodness of God. Dumaan na kasi ako sa buhay ko na iniisip ko ganito yan eh, you can make your own tags so ikaw pipili, kung gusto mo yun, kung gusto mong paniwalaan na may sumpa, mangyayari yun. Kung gusto mong maniwala na meron ganitong gift or blessing, yun ang mangyayari so bahala na kayo kung ano ang gusto niyo. Kasi sometimes people connect the dots and the dots you usually see are the most obvious,” she reveals.
The Status Salon endorser says she tries her best to deal with pressure in amore positive way in order to steer away from any trouble. “I take a lot of vacations din. (laughs) It’s hard. Let’s just say that it’s not the easiest thing to do but it’s also super fun. I think I’ve come to see it in a different way from before. Yung appreciation level ko from when I started has risen na so high. Siguro dahil anywhere you go, anyone you meet, iba na kasi yung turing nila sa iyo eh. Like I was in CCP during the weekend for Musicale and a doctor approached me and said, ‘I really feel so close to you because of Showtime!’ I appreciated that a lot of  people parang they find that they’re your friend na, parang ganun. Because I do travel like we do TFC shows din, nakukuha ko yung feedback, yung love. Nagiging more appreciate lang talaga ako. Once you see naman yung fruits of your labor, how tiring it may be, parang nawawala yun,” she relates.
Celebrity