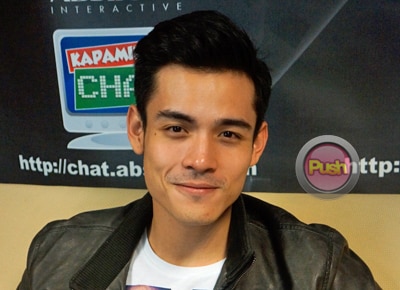 Xian Lim revealed that the filming of his upcoming movie with Kim Chiu has already begun. In an interview with Push.com.ph, the actor relayed, "On going shooting namin is good, unfortunately may bagyo kasi so medyo nagkakaroon ng delays but at least nagri-grind na, slowly but surely pero ‘yun I’m sure a lot of people are waiting for it.”
The actor shared that he is doing a romantic-comedy movie again with Kim, but he stressed that it is different from the first two movies they made. "It’s different, I want to say it’s a romantic comedy pero basically ‘yon ‘yung gist but I don’t want to say so much about my character kasi baka ma-preempt lang but what I want to say is that they should just wait for the trailer at kung maglabas man ng pictures ang Star (Cinema) because they will be surprised and they will be excited," he said.
Xian’s dream house was recently finished and was recently featured in Starstudio magazine. The actor remarked that he truly feels very proud and fulfilled with this new accomplishment.
"It is such a big achievement kasi I think for every artista kapag nakakabasa kami ng magazine pagnakalagay bahay ni ganito, bahay ni ganyan, we always say to ourselves na sana one of these days kami rin naman. Iba pa rin ‘yung nakapagpatayo ka ng sarili mong place and ‘yun I’m really happy na I’m getting really good feedbacks," he said.
Xian shared the he designed the interior of his house and that he picked European and Mediterranean designs. "Ako ang nag-interior non, European may halong konting Mediterranean na may halong pillars ganon and siyempre tinulungan din ako ng Gold Worth Builders, ‘yun ang pangalan nila, actually ‘yung vision ko they made it come alive,” he said.
He shared that his mom also contributed designs for their new home. "Well she has her own [designs] mga kumbaga ‘yung mag gusto niya katulad ng high seats, she wanted high seats, she wanted her room nearer the entrance kasi she wants to see everything that’s going on, she's really a protective mom. Parang marami siyang inputs, she wanted a billiard table sabi ko sure ‘yun din naman gusto ko," he stated.
Celebrity