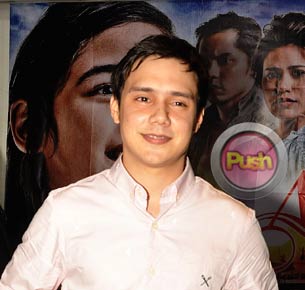 After surprising his fiancée and the public about his church proposal with his girlfriend, actor Patrick Garcia recalled how his romance with Nikka Martinez started out of a casual invitation.
During their live appearance on the Sunday episode of The Buzz, Patrick revealed that everything started for them after Nikka jokingly invited him to her hometown Dumaguete.
“Yes I followed. Dapat actually dapat sabay kaming pupunta. She thought na hindi ako sasama. Kasi we just knew each other eh,” said Patrick.
Nikka confirmed this saying that, “We just met and I just casually asked him to go with me and he suddenly showed up. We were three and then I asked him ‘If you guys wanna come, I’m going to Dumaguete’ and siya lang ‘yung sumunod.”
Going to Dumaguete allowed Patrick to meet Nikka’s family including her father and sisters. However, Nikka clarified that they weren’t a couple yet when she invited Patrick to come with him.
“No we’re just friends. Actually parang doon nga everyone started thinking na boyfriend ko na siya kasi I introduced him to my Dad and sisters,” she recalled.
Patrick for his part, clarified that he was already attracted to her at that time reasoning that “Siyempre hindi naman ako susunod kung walang attraction.”
From that moment on, Patrick courted Nikka for some three to four months more before they officially became a couple.
Fast forward to today, Patrick proposed to his Sunday school teacher girlfriend while at church service almost a week ago.
Before he knelt down in front of Nikka, he said, “It will make me very happy if you'd allow me to make it right with you and most of all of we could make it right with The Lord.”
What was the motivation to say “I want to make it right with you?”
“Before kasi I was a Sunday Christian lang, you know I didn’t really read his word, read the bible ganon. And then when I took my walk with the Lord seriously then I found out things that would really please him. Things that would be right so when I found that out. Malalaman mo eh, I think this is the right time. We may have started out wrong but kaya namang itama,” he said.
Patrick has a one-year-old daughter with Nikka.
According to Nikka they plan to tie the knot March of next year.
Celebrity