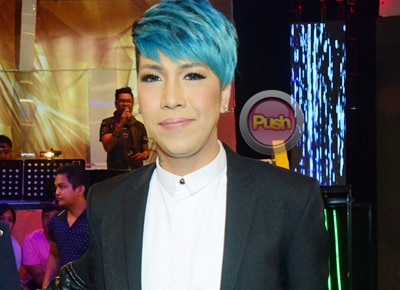 Comedian Vice Ganda is currently in hot water over complaints of committing offensive actions and double-meaning words and actions on the two shows that he’s hosting.
The Movie and Television Review and Classification Board (MTRCB) in a recent order singled out the July 28 episode of It’s Showtime where Vice was complained for engaging into Alleged Offensive and Degrading Scenes.
“The challenge portion in the program’s segment entitled ‘Gandang Lalaki’ showed program host Mr. Jose Viceral a.k.a. Vice Ganda wiping off with a towel his sweaty armpit and smudged this towel all over the face of one of the program’s male dancers,” the document explained.
Due to this incident, the MTRCB recommended for Vice as well as the staff of the two program of Showtime to undergo a “three-month period of close collaboration” with the regulatory board involving It’s Showtime’s programming.
Apart from Vice, Showtime’s business unit head Reily Santiago as well as Billy Crawford and other staff met with the resource personalities of National Council for Children’s Television (NCCT) and Ateneo Human Rights Center (AHRC) representatives for a mandatory conference last August 26.
After admitting their fault over the incident, the show’s staff along with Vice also agreed to undergo a seminar concerning “media and the legal profession in the context of both audience-sensitivity and the administration of justice.”
Meanwhile, the MTRCB likewise raised acomplaint on the August 3 episode of his late-night variety show Gandang Gabi Vice over Scenes Allegedly Containing Words and Non-verbal Acts with Double Meaning Inappropriate to Young Viewers.
“The complained scenes pertain to Mr. Jose Mari Viceral a.k.a. Vice Ganda’s use of words with sexual undertones and other non-verbal acts with double sexual meaning while interviewing Mr. Piolo Pascual and his personal assistant,” the document said.
According to the report, the AHRC representative opined that “given the mature thematic nature of Gandang Gabi Vice it would be much helpful if children are prohibited from being part of the program’s live audience taping.”
Vice is actually not a stranger to being called by the MTRCB. Just last year, it was MTRCB chair Toto Villareal who even personally spoke with Vice regarding the “comedy bar humor” he supposedly injected on his May 17 I-Vice Ganda Mo Ako concert in Araneta Coliseum.
Celebrity