Michelle Gumabao reveals that they will be taking her father’s case to the Court of Appeals. 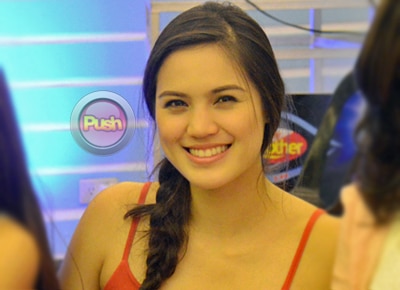 Former Pinoy Big Brother All In housemate Michelle Gumabao opts to remain positive amid the current controversy that’s being faced by their family over the recent conviction of her father, Dennis Roldan, for kidnapping a young boy in 2005.
Michelle, in an interview on the sidelines of the Kapamilya All Out Trade Concert on Thursday, echoed her father’s lawyer Orlando Salatandre’s strategy to reverse the ruling of Judge Rolando Mislang of Pasig City Regional Trial Court Branch 167 last Tuesday.
“I don’t know actually because I wasn’t there during the trials but of course we will still go to Court of Appeals like what our lawyer said. But in terms of the decision, for me, wala tayong magagawa. Nasabi na nila. We're going to take it as a sign na lang for us,” said Michele about her father whose real name is Mitchell Gumabao.
Aside from Michelle, her younger brother, Marco Gumabao, is also in showbiz and can be seen every Sundays at the teen-oriented show LUV U.
Despite the negative verdict on her father’s case, the former De La Salle University's volleyball star player is confident that it won’t affect their career in the Kapamilya network. "I don't think naman... Ako, personally, it won't affect me, because I know who my dad is and I'm proud of him no matter what. I'm sure gano'n din 'yung stand ng kapatid ko.
"In or out of showbiz, we love our dad, we know our dad, and our relationship with our dad is solid. I know a lot of people support him, lalo na ngayong nagbalik showbiz siya. I'm proud of him,” Michelle said.
Stressing that this ordeal is only a “minor setback” for her father, the young athlete reiterated this was just the Lord’s way of giving purpose to her father.
“Alam kong gagamitin siya ni God kahit saan man siya. It's all a matter of location, kung saan lang talaga siya gagamitin," she said.
A former basketball player, Dennis eventually entered show business in the late ‘70s and then public service. He was elected as Quezon City councilor in 1988 then as congressman of Quezon City's 3rd District in 1992.
In the end, Michelle thanked the supporters of her dad and their family. "I know that this is only the beginning, and we're really going to work harder as a family and stay together. We're going to stay strong.
“Whatever happens, we're always going to be here beside our dad. We're happy, whatever happens. We're going to smile and we're going to keep on inspiring people, because that's what we're called to do. And alam ko, God's will lahat ang nangyayaring ito," she ended.
Celebrity