James and Nadine are now officially part of the Kapamilya network after signing exclusive contracts. 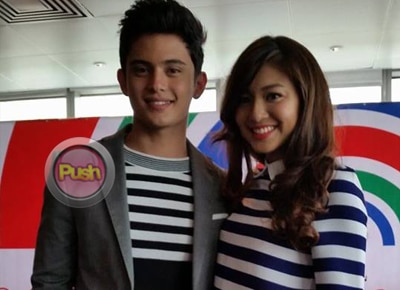 Coming right on the heels of the success of their second movie team up Talk Back and Your Dead [TBYD], rising love team James Reid and Nadine Lustre, more popularly known as JaDine, have inked a contract with ABS-CBN.
During the contract signing on Tuesday, the newest Kapamilya stars were nothing but grateful about this new milestone in their budding careers.
“I always hoped to be back here in ABS so it feels good,” said James, who, in previous interviews has been very vocal in expressing his desire to become a Kapamilya star.
James added that he felt that it’s only “natural” for him to become a Kapamilya noting that it is with ABS-CBN where he started. Recall that James was the Big Winner of the Pinoy Big Brother Teen Clash back in 2010.
Nadine, for her part, felt good to be “part of a new family.”
But the 20-year-old actress remains overwhelmed about how her career has been faring to date. She said, “Medyo hindi pa nag-si-sink in ang mga nangyayari. After DNP [Diary ng Panget] then biglang Talk Back and this. Sunod-sunod.”
With their joining the huge roster of Kapamilya stars, James and Nadine shrugged off speculations that they are being geared to compete with top ABS-CBN teen love team Kathniel, composed of Teen King Daniel Padilla and Teen Queen Kathryn Bernardo.
“Hindi naman kami nakikipag-kumpitensya. We’re just being ourselves,” said Nadine. James, on the other hand noted that they are a “different love team” from the two.
But knowing that he’s part of showbiz, James noted that comparison is natural.
“I think it’s good for us being upcoming stars. It’s good because they’re the biggest love team. We must be doing something right.” (to be continued on next page)
In other news, James and Nadine claimed that they were unsurprised that TBYD is still raking in at the box office until this day.
“We were really confident about Talk Back so we expected at least that all the fans of DNP would also love Talk Back,” said the Fil-Australian actor.
Nadine shared that they actually received positive comments from the fans who have seen the movie.
“Well yeah it definitely leveled up po ‘cause with DNP very light lang. Ito kasi there’s drama, there’s action. There’s everything eh. So nag-level up definitely maraming nagco-comment,” she said.
In the same way that a lot of moviegoers appreciated their “leveled-up” performance on TBYD, a good number of critics were not happy about the outcome especially noting the “jumbled plot” of the Andoy Ranay creation that was based on a Wattpad book written by Alesana Marie.
James defended their latest film and explained, “I think we did our best as actors with the story that was given but it’s really difficult to compress stories and put out changes and keeping faithful to the story. Those who read the book really appreciate it.”
Nadine added, “Tsaka iba-iba tayo eh. You can’t please everyone talaga.”
Celebrity