The housemates get a surprise visit from their families

Kuya surprises the housemates with a visit from their families. 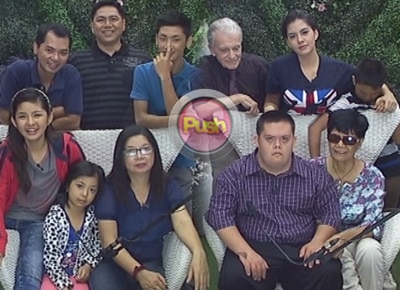 After successfully carrying the mini Big Brother house a hundred times around the pool, Kuya rewarded the housemates with a makeover. The girls squealed in delight when they heard the word “makeover.”
After their makeover, the housemates had a pictorial. Because of the pictorial, the housemates could not help but be reminded of the impending Big Night. Daniel and Vickie wondered if the rules have somehow changed and they were already the Big Five, while Loisa thought how painful it would be to be evicted when there were only five of them left.
Kuya gave Maris a framed family picture of her parents’ wedding. Loisa was envious and asked Kuya why it was only Maris whose family came to visit.
Unbeknownst to the housemates, Kuya was planning to bring all of their families inside the house. Jane’s mom, dad, sister and little brother Charles came first and Jane was given the chance to have a family pictorial with them. Jane thanked Kuya for giving her a fond memory with her family.
Loisa couldn’t react at first when she saw her family in the living room and she told Kuya she thought she was dreaming. Loisa’s family told Kuya that they miss Loisa’s “kakulitan at ingay.” Loisa also enjoyed the family pictorial with her mom, dad, kuya, and sisters. Loisa told Kuya that this is their first family picture with all the members of her family.
By this time, the other housemates were already wondering whether their families would visit them too. Daniel didn’t expect it would be possible for his family to come because he knew how expensive it would be to bring his family all the way from Brazil.
Vickie’s face lit up when she saw her father. Then Kuya asked Vickie to come inside the confession room where her mom was waiting– for her. Vickie was still feeling mopey though because her siblings were not present.
Later, Vickie’s brothers Kian and Patrick walked into the living room and Vickie became emotional. She hugged the boys tightly and introduced them to the housemates. Kian is Vickie’s brother who has DOWN syndrome.
Kian, apparently, is very fond of Daniel. Kian kept saying Daniel’s name and hugging Daniel. Kuya even allowed Daniel to play with Kian. When Daniel told Kian that they were best friends, Kian agreed and said—“yes!” Daniel was overwhelmed and deeply touched by Vickie’s family.
Vickie thanked Kuya for their very first family picture. Last June, a crying Vickie told Kuya that her family doesn’t have a family picture and it is her dream to have one.
Vickie begged Kuya to give her a big print out of the picture. She also said her family were very happy during the pictorial and she said, “Sana ganyan din kami sa bahay.”
Daniel had no idea that his sister and mom were already in the Philippines and would visit him at Kuya’s house. Daniel told Kuya that he only sees his family once a year and that it is his dream to bring all of them to live in the Philippines. However, he told Kuya that he hasn’t been able to do that because of the exorbitant airfare from Brazil to the Philippines. What will happen once Daniel sees his mom?
Celebrity