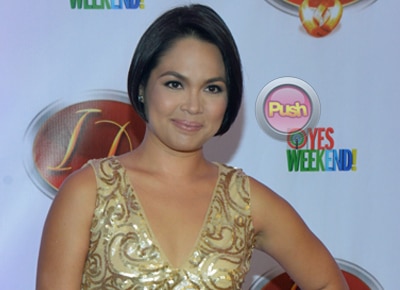 Judy Ann Santos couldn’t help but feel sad over the recent and publicized shouting match that her manager Alfie Lorenzo recently got embroiled in with Regal Films matriarch Lily Monteverde at the latter’s movie press conference-cum-birthday event.
Juday is not even certain if she could be instrumental for the two showbiz personalities’ reconciliation.
“Sa totoo lang hindi ko alam kung paano ko sasagutin because pareho ko silang mahal and sana nga hindi na lang nangyari,” Juday said in an interview during the grand press conference of her upcoming original realiserye for couples I Do.
According to Juday if she only could turn back the hands of time to that day, she would. “Sana pwede mo siyang burahin ng liquid paper and ma-erase siya sa Internet, sa media and everything because it was an ugly situation of two friends.”
Highlighting that as someone younger, all that she can do as of the moment is to pray for them to be able to patch things up for they are after all, as she says, “magkaibigang tunay” and for the incident not to happen again.
“May mga bagay na hindi natin hawak. Hindi ko masabi kung magiging tulay ako kasi pareho naman na silang alam nila kung ano ang ginagawa nila at hindi ako ang magiging daan kung ano ang dapat nilang gawin dahil di hamak na mas bata ako sa kanila. At ayoko namang sabihin nila na dinidiktahan ko sila kasi hindi naman ako naging ganon to begin with. All I can do now is for everything to be okay sana lang, sana lang hindi na siya nangyari,” said the 36-year-old actress.
The I Do host said she has yet to speak about the shouting match with her talent manager.
The verbal altercation happened last August 14 which started when Alfie called the Somebody To Love movie director Jose Javier Reyes “malas,” a term that triggered Mother Lily’s ire because it was, according to her, an inappropriate term to say at her organized event.
Reports have it that the director and talent manager’s spat started in 2012 when Judy Ann agreed to do a film with Direk Joey reportedly without Alfie’s consent.
Juday for her part claimed that she thought that the said issue was all behind the two personalities when it was resolved before.
“Actually nung [Mga] Mumunting Lihim parang feeling ni Tito Alfie na-bypass siya or something pero napagusapan naman eh. Matagal na, two years ago na ‘yun eh so it was a little thing na dapat hindi nalang lumaki,” the star stated.
Even if apparently, the issue’s not yet over for the two, the actress believes that it shouldn’t have involved other characters that are not really privy to the incident. “Kasi it was a situation na nangyari naman sa aming tatlo, hindi na siya dapat pang lumabas dahil hindi naman na involved ang ibang tao doon. So that was two years ago, I never thought na darating sa puntong ito na ganito at may iba pang madadamay.”
Why it even went on this long, Juday has no idea, the only thing that she’s praying for as of the moment is for everyone involved to kiss and make up in due time.
Celebrity