Repertory Philippines shares the beloved tale about a puppet who dreams of becoming a real boy. 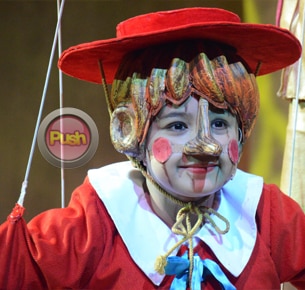 After more than 45 years of staging high quality theater productions in the country, Repertory Philippines will be presenting their theatrical production for young audiences this year with the story of Pinocchio, a wooden puppet that comes to life with the help of the Blue Fairy and who dreams of becoming a real boy someday. According to Joy Virata, Children's Theater Artistic Director, six different children will be playing the lead role. “I have had the pleasure of using the incredible talent of acting and singing coach Baby Barredo to whom I entrusted the task of training six young actors who lay the part of Pinocchio. Why six? Because sometimes we have multiple shows on weekdays and weekends and the role of Pinocchio is taxing both physically and mentally and has to be shared,” she said.
Theater veterans who are part of the cast also share the challenge and passion they put in when it comes to doing theater for young audiences as opposed to doing adult plays. Oliver Usison, who plays Pinocchio's loving father Geppeto, admits that connecting to the child actors he shares the stage with is important, “Children's theater is really tough to do. I think what drives us every time is knowing that children will leave the theater learning a lesson or two from our storytelling. That alone is more than enough for us. That alone inspires us to do our job.”
Repertory Philippines actress Liesl Batucan (who plays the blue fairy) said she considers acting for children a big responsibility. “I think the joy of children's theater as an actor is that you have a huge responsibility also as an actor because these are young minds that you are helping to shape so these are going to be the adults of the future so they are really the hope of the future. If we can in our own little way for those two hours impart some important values in a way that they are enjoying it and in a way hat they don't even know it. That's the best way to learn, you don't even know it, it's subconscious, they've innately absorbed all of the lessons,” she explained during the Pinocchio press preview held last August 12 at Greenbelt 1 in Makati city.
Having performed onstage for almost two decades now, theater artist and singer Bituin Escalante plays the male role of the evil Coachman in Pinocchio. The 37-year-old Awit Awards winner said she is not bothered by the gender swap on stage. “From the mouth of babes, the truth will always set you free. So if you're coming from somewhere true, whether you’re playing a man or a woman, it's going to translate,” she said. The talented performer who performed with almost all of the top theater companies in the country shared why she has an even deeper love for acting onstage now. “This is the work that I do that I can share with my children. I have a one-year-old and a two-year-old and they saw the dress technical rehearsal and this cast taught them how to sing and say 'Buon Giorno!' it's a gift to know that you can touch young lives and we're creating new audiences for theater and we love theater, we love the challenge of doing it,” she added.
Watch Repertory Philippines children's musical Pinocchio as it runs from August 16 to December 14 at the Onstage theater at Greenbelt 1, Makati City. Directed by Joy Virata. For tickets, contact the Repertory Philippines office at 843-3570, (02) 555-0082, (02) 451-1474, (02) 584-8458 and (02) 451-1796; or log on to: www.repertoryphilippines.com. Tickets are also available through Ticketworld at (02) 891-9999 or visit www.ticketworld.com.ph
Celebrity