Gretchen Barretto ‘accepts’ not being married to Tonyboy Cojuangco 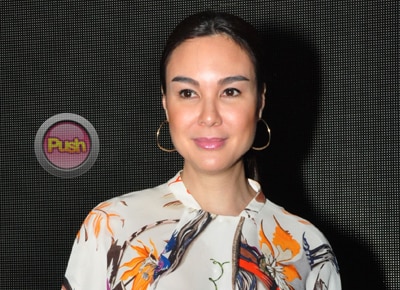 Gretchen Barretto seemed to have come to terms about not being able to get married to longtime partner Tonyboy Cojuangco.
Gretchen, during her introduction as Karat World’s newest endorser, was seen in a video garbed in a wedding gown. “Feeling ko, ikinakasal na rin ako… with Karat World,” Gretchen joked.
Despite being in a relationship with Tonyboy for over two decades, La Greta has yet to tie the knot with him. Tonyboy’s marriage to his former businesswoman wife has yet to be annulled.
The ever stylish actress began, “Ganun talaga ang buhay, hindi perpekto."
“There are things you have in life, there are things that you don’t have. I think accepting what you don’t have—just enjoying the moment and the blessings that you have every day—is more than enough,” she said.
She may not have been blessed in the marriage department, but Gretchen is surely blessed when it comes to her career as she is once again tapped to be part of a Star Cinema movie.
“Nagsu-shoot ako ngayon ng The Trial for Star Cinema with John Lloyd Cruz, Richard Gomez, Jessy Mendiola. Marami kami dun and... I think, in September, ilalabas na,” she revealed.
Gretchen considers working with the box office-topping actor a “dream come true” because “I’m really honored dahil sa career natin… career ko ngayon, at least I’m getting the chance to work with the people that I really admire, as far as their acting skills.”
According to Gretchen she has had a couple of scenes with John Lloyd, but she shared that she couldn’t share about it much on her social media account because “pinagbabawalan ako ng ABS-CBN na i-post.”
Can she describe their scenes together? “Napakahirap, kaya nga medyo nangangayayat ako, puro medyo stressful ang aming mga eksena,” Gretchen supplied.
Without any clue as to what her role on the film would be, Gretchen was quizzed by the press whether she and John Lloyd have passionate scenes, something which she answered with, “Hindi naman, hindi naman ganun. Alam mo, mature na ako ngayon, nabawasan na ako ng ka-naughty-han at saka he’s not my age, so medyo mahiya naman tayo.”
All things considered, the star remains very grateful that ABS-CBN has continuously been supportive of her career. “Lahat naman ng ibinibigay ng ABS-CBN sa akin, malalaki talagang proyekto, kaya nagpapasalamat ako sa kanila,” she said, adding that, “And I’ll be having a contract signing very soon.”
Celebrity