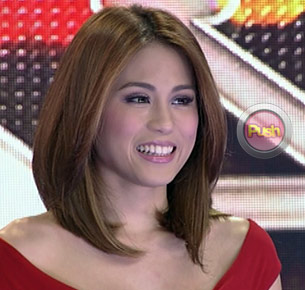 As a showbiz talk show host, Toni Gonzaga is among those select individuals who has to become exposed to all kinds of news even those of failed marriages in the biz. While she's yet to be married, Toni confessed that the growing trend of separation among married stars these days is somehow terrifying her.
"Siyempre nakakatakot. Lahat naman siguro ng mga babae na nangangarap na ikasal one day, na magkaroon ng pamilya," she blurted during the Sunday episode of The Buzz at the POV segment of the show after news about Claudine Barretto's ongoing legal battle with estranged husband Raymart Santiago was aired.
She continued, "Siguro wala namang babae na nangarap na magkaroon ng broken family. Lahat tayo in the end gusto natin magkaroon ng buong pamilya, maayos 'yung mga anak natin, lumaki ng kumpleto ang nanay at tatay nila."
However, Toni is not innocent of the fact that no one can control everything and that in as much as she for instance, hopes for every couple's marriage to stay intact, there are other factors that could greatly affect its strength.
"But siyempre hindi naman natin hawak at controlled ang mga situations na nangyayari sa buhay lalo na 'yung mga decision ng mga magulang," noted the Pinoy Big Brother All In host.
Just last week, Claudine and Raymart posed for a photo with their kids Santino and Sabina while at a restaurant which seemingly hinted at the impending end of their legal battle. However just before real progress could be seen, Buzz reported that Claudine was once again infuriated by Raymart's counsel Atty. Ruth Castelo, so much so that she slammed her by posting on her Facebook wall and calling her a "big mouth."
To this, Toni reiterated that more than the parents it's really the kids who suffer the most when their parents are bickering.
"Siyempre bilang mga anak, speaking on my point of view bilang isang anak, kapag nakikita mong hindi maayos 'yung situatiin ng mga magulang mo mas mabigat 'yun kasi diba may effect 'yon. May psychological effect 'yun sa mga anak," she noted.
Celebrity