Will Darren Espanto be staying in the Philippines after ‘The Voice Kids’?

Darren Espanto shares his plans after ‘The Voice Kids of the Philippines. 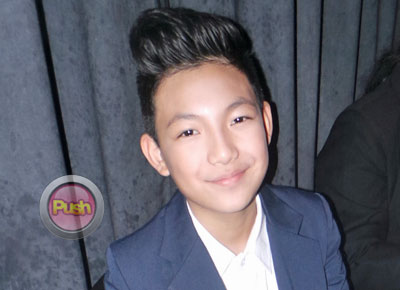 Darren Espanto remarked that he still feels fortunate despite not winning the title as the first The Voice Kids of the Philippines champion. "I feel very blessed and I feel happy na may sumuporta sa akin," he said in an interview backstage after the announcement of winners on Sunday night, July 27, 2014 at Resorts World Manila. Darren placed second in the competition while Lyca Gairanod, who was also from Team Sarah, was hailed as the grand winner.
Did he expect that his name will be called as the grand winner? "I was expecting my name but I was also expecting Lyca's," he replied. The young singer admitted that he considers Lyca as his toughest competitor in the contest.
When asked if he will be staying in the country or if he will be going back to Canada where he was raised, Darren replied that he might choose not to leave if he will be offered projects here in the Philippines. "Kung may offer I’ll stay here po," he relayed. But one thing is for sure, Darren will keep on doing what he loves. "I’ll continue my singing," he said.
The Canada-raised Filipino singer will be doing some shows with the other The Voice Kids contestants in the next few days. “Well meron po kaming mga shows and mga guestings,” he relayed.
Darren relayed that he also wants to try acting if the opportunity comes. "Pangarap ko rin pong mag-artista." He said that he would like to star in a project with his coach Sarah Geronimo. "Marami po [akong gustong makatambal] eh, katulad po ni coach Sarah," he said.
On the biggest lesson that he has learned from his coach Sarah in the competition, Darren shared, "Always stay humble.”  With his rising popularity as a singer because of The Voice Kids, Darren said that he is nothing short but grateful.  “Well, ‘Im just thankful po,” he stated.
Celebrity