Enchong Dee shrugs off skepticism about his new girlfriend 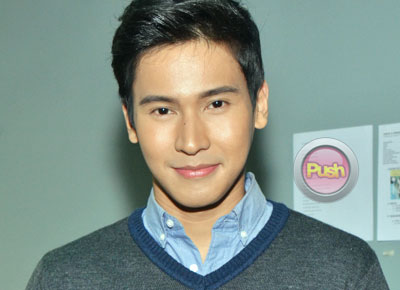 Enchong Dee’s admission about being in a relationship with a non-showbiz woman has stirred reactions from his followers and critics alike. While many were happy, a lot of his critics were also skeptical if he really has a girlfriend.
An unruffled Enchong addressed the issue during the recently-concluded press conference of his upcoming film Once A Princess with Erich Gonzales and JC de Vera.
“Wala naman ako makukuha kung maniwala sila o hindi, okay lang naman sa akin. Sa akin kasi sanay naman na ako.  As much as possible, I respect their opinions also," he calmly said referring to his critics, but added, "Okay lang sa akin, huwag lang sa kanya [his girlfriend]."
Enchong who confessed about his relationship early this month claims that it was his and his girlfriend's mutual decision to keep everything low-key.
"My girlfriend is not from showbiz. As much as possible, I protect her from all this," he said.
Ever since his revelation, fans have tried to discover his girlfriend's identity and among the names that came up was that of a model named Sam Lewis.
When this presumption was mentioned, Enchong replied with "As much as possible, I don't want to say it talaga. Ibalato niyo na lang sa akin. This is, by far, my happiest relationship and my most private relationship. I would really appreciate it if we could just stay [that way]."
According to him,"Simula noong na nalaman ng tao, may mga nag-ti-tweet sa kanya, may mga gumagawa ng account to bash her, which I feel bad [about]. Hindi siya sanay sa ganito, eh."
While many might be wondering why he even divulged his relationship if he won't be answering questions about it, the dancer-actor had a simple response: "It was just, may nagtanong sa akin, sinagot ko lang, and ever since naman, hindi naman ako nagsisinungaling. Hanggang doon lang 'yung masasabi ko."
What did she feel when she heard about his public admission? "She felt good," he said.
But he was quick to clarify that she never demanded that he do what he did. "Hindi naman sa sinabi niya. I would think na ang pangit din naman kung idi-deny siya. Basta 'yung acknowledgment lang na nandiyan siya."
Without revealing much, Enchong further shared that he met her during an event he attended after filming scenes for Once A Princess. "Doon, nakita ko siya, tapos nagpakilala ako, nagkausap kami, tapos hiningi ko number niya. That's it," he said.
How was he able to seal the deal with her? "Well, I treat her like a princess, and siguro nakita niya na good boy din ako," Enchong stated.
While he refused to reveal her age, Enchong gladly that he calls her "sweetie ko."
Once A Princess starring Enchong, Erich, and JC hits theaters nationwide starting August 6.
Celebrity