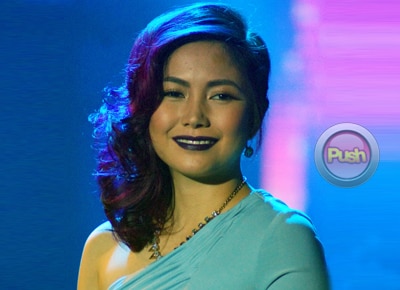 Pop Rock Princess Yeng Constantino is bent in making her upcoming wedding to  boyfriend Yan Asuncion not just about her, but also about setting an example to her many young followers about how marriage should be seen.
Yeng, in an interview at the Academy of Rock We Are Young charity concert press conference, firmly emphasized that she wants everyone to remember her as the person who showed that commitment is not as frightening as everyone thinks.
She said, "Kung meron man gusto kong ma-impart sa mga kabataan na hindi naman nakakatakot magpakasal. Na ang pagpapakasal ay pagiging committed sa isang taong minamahal mo ay sobrang napakagandang bagay."
The first Pinoy Dream Academy Grand Star Dreamer even reiterated that "It's an honor to be partners with someone na alam mong mamahalin ka habang buhay."
While many thought that Yeng rushed into marriage since Yan is her first ever boyfriend, Yeng doesn't see it that way. If anything she believes that being committed is way better than entering a relationship "that will not be honoring God and of course hindi rin makakabuti sa ‘yo."
Since she started her career in 2006, Yeng has been consistently known for writing OPM songs that cater to the youth's preferences like her hits “Jeepney Love Story,” “Chinito,” and “Pag-ibig” to name a few.
With her set to embark on a new chapter in her life, questions about her musicality have come to the surface but Yeng says this shouldn't worry her fans. "It depends kung ano ang mga influences ko and reason and I know that there's an impression in the industry that if you get married you get old and 'yun 'yung lifespan ng isang artist eh and 'yun isang something na hindi ako masyadong naniniwala. I don't want to produce a music and I don't think I would change my sound because I'm getting married," Yeng said.
She added that even though the industry has already might have the mindset that marriage tends to ruin an artist's artistry, Yeng is keen on maintaining her identity as a musician.
"If people, they like my music because it’s for teens and [it’s sincere] then I'm not taking it out. 'Yun nga sa ating industriya kapag nagpakasal ka dapat technical kana pangit na 'yan, ganyan ganyan," she reasoned.
Yeng got engaged to Yan last March and they are set to tie the knot by the latter part of the year.
Meanwhile, Yeng who was once again tapped to be the ambassador of Singapore-based performance school Academy of Rock likewise shared her dreams of eventually teaching songwriting to the school's students.
"It's very informal actually, hindi siya parang ako as a teacher eh. Parang one time we went to a mall and they asked me if I could share something to the students na kasama namin that time.
"Wala pa rin 'yun pero eventually I will talk to them na and gusto ko rin talaga kasing i-share ang vision ko as a songwriter. Dun ako sa pagsusulat and 'yung process kung paano nabubuo ang isang kanta," Yeng shared.
Asked what the best part of being an AoR ambassador is, she happily shared: "Being an ambassadress of AoR hindi pa ako nabigyan ng opportunity to be a teacher pero sobrang sarap lang kasi parang ang part ko lang is just to be myself, to write songs and embody kung ano ang vision nila which is 'yung sumulat ng kanta and hasain 'yung mga talento."
Celebrity