Liza Soberano actress says she is excited to be launched in a new love team in Star Cinema. 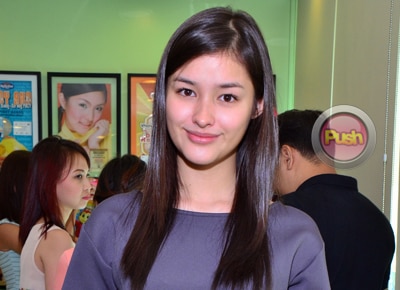 After entering showbiz last year, Liza Soberano made her big screen debut in Must Be Love as the girl who becomes the apple of Daniel Padilla's eyes. Lately, she has also done TV shows, graced numerous magazine covers, and getting more and more product endorsements as well. This year, she is launched as the new love team partner of Enrique Gil in upcoming movie The Bet.
“I wasn't expecting to get my own movie kagad because coming from Got To Believe, I just played the third wheel so ini-expect ko teleserye muna pero no movie talaga. I'm nervous. Kinakabahan ako how the people will react to it and sana talaga they'll like it and will support me. Pero happy ako and grateful sa Star Cinema na they gave me the chance to have my own movie,” she said.
Liza said her role in The Bet will be different from She's The One where she played Enrique's best friend. “Yung character ko kasi sa She's The One was the best friend na boyish at saka very confident yung character ko dun. Dito naman I never knew him before pero crush ko unang pagkakita ko pa lang sa kanya and dito medyo may gagawin silang differences sa itsura ko talaga. They're really going to make me look different. Also, hindi pa rin ako girly, hindi rin ako boyish, parang cowboy ako. And also sa ugali mahiyain ako dito, very shy na hindi naman sobrang introvert pero it's hard for me to fit in with other people kasi I'm different nga,” she explained.
Even though they have already worked together in a film, the 16-year-old Fil-American actress said she still can't get over the fact that will be Quen's love team partner. “Kasi hindi pa ako sanay na may lalakeng kasama (laughs). Parang wala lang, iba yung feeling eh. Actually naiilang ako ngayon kasi parang ang panget ko (laughs). Kakagaling lang niya sa Mirabella tapos biglang ako. Ewan ko I don't know what to think. I think I'm happy na nakitaan kami ng chemistry sa She's The One but I'm also nervous kasi I don't know how the people will react to our love team,” she admitted.
During the storycon of The Bet held at the Star Cinema office last June 24, Liza said she could not contain her emotions about the project. “Ewan ko bakit ako kinakabahan. I'm happy na siya yung kasama ko kasi marami kaming common interests. Feeling ko magiging close talaga kami. It will be easy to work with him. It will be easy to connect acting-wise and I'm just really, really happy na siya kasi he's really cool and relax lang sa set,” she said.
When asked if she has always been attracted to the Kapamilya heartthrob, Liza reluctantly admitted there is “kilig” whenever she encounters her showbiz crush. “Hindi ko po alam (laughs). Actually before pa nun, at first sight, kasi I think it's not hard to like Enrique kasi he has really nice physical features and he's really hot and he's really nice also. Did I really say that? Oh my God I said that unconsciously (laughs). Kasi nung naka-work ko siya sa She's The One we were able to talk to each other and I was able to find out that he likes a lot of things that I like also and he's funny and really nice,” she shared.
Celebrity