Richard Yap says he is busy preparing for Be Careful With My Heart's second anniversary concert happening this month. 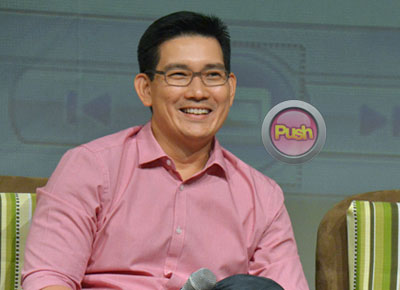 After signing his new contract with ABS-CBN last July 11, Richard Yap said it felt good to be a certified Kapamilya. “It's another one year contract so I'm very thankful to ABS-CBN for having faith in me and having the trust to represent them for another year. Be Careful With My Heart is still ongoing so for the next few months we'll still be doing that and if ever there are other shows hopefully next year. There are no details yet so it depends sa management if they want to give me projects,” he shared.
Richard said everyone in the cast is currently busy getting ready for the Be Careful With My Heart second anniversary concert later this month. “Surprise na lang yang line-up namin. There will be a few old songs but there will be a lot of newer songs. We're all busy with preparing for it right now so we're doing rehearsals, recordings and all that. We're trying to get ready for the big night. We'll try our best,” he said.
Although fans of the show are curious to see “Sir Chief” show his moves on stage at the concert, the 47-year-old actor said dancing is not really his thing. “That is not really one of my strengths so I'd rather not do something like that,” he added.
After two years, Richard said the plot of Be Careful With My Heart has definitely gotten more interesting as everyone is growing up. “You'll see a lot of the characters going out on their own like Luke is starting to live his own life, he has his own condo and all that. The rest like Nikki also because she's starting her college life. You'll see not only the lives of Richard and Maya, but also the lives of the other people who are involved like Tatay Arturo and Nanay Teresita, how their relationship is going to blossom again so there's a lot of things to look forward to,” he said.
The Filipino-Chinese actor said it is good that the storyline has gone beyond the love story between Sir Chief and Maya. “Well for us it's good kasi hindi lang sa amin naka-revolve so it now involves a lot of the other characters. Kasi makikita ng viewers what is going on to the people related to us there,” he said.
Even though it was rumored that Be Careful With My Heart would come out on the big screen this year, Richard said those plans will not be pushing through anymore. “Mukhang hindi na because the story is instead of linabas sa big screen, it's the one that's being shown on TV already. So parang mahihirapan na tayo mag-movie nun,” he explained.
Aside from showbiz, Richard said he is still focused on his main source of livelihood as a businessman. He currently owns three restaurants. “Hopefully we'll be expanding maybe later in the year or early next year. I've always been into business even before I came into ABS-CBN I was part of a group of people who had a franchise so it's only normal because that's my training. I was in business before, I'm a Business Management graduate. My father was a businessman so it just follows,” he said.
At home, Richard said he is also handy in the kitchen when needed. “Well I took up basic culinary arts also so I know how to cook a little bit. I'm not really practicing cooking anymore but I like making yung mga pastas. My favorite is Pasta Alfredo,” he shared.
Celebrity