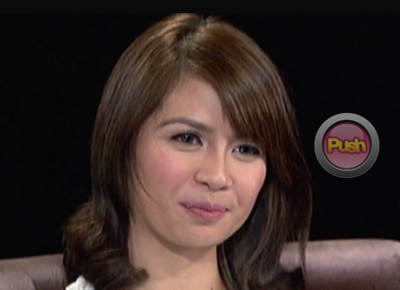 Actress Kaye Abad just laughed at the ridiculous rumor that she dated her current boyfriend Paul Jake Castillo while still in a relationship with ex-boyfriend, musician Guji Lorenzana.
Kaye broke her silence on the issue for the first time during the Sunday episode of The Buzz saying that the rumors are not true.
"Hindi po talaga. Actually it wasn't planned at all. So 'yung iniisip ng iba na nag-overlap, hindi talaga. No, wala po" she said.
While rumors of them cozying to each other have started early this year, Kaye and Paul Jake only confirmed their relationship last month on Push.com.
The former Annaliza actress called falling in love with the former Pinoy Big Brother housemate a great risk since they have a lot to lose if things don't pan out well for them.
"Actually natakot talaga ako. Ang hirap mag-take ng risk kasi magkaibigan [kami]. He's one of my closest friends so kung hindi mag-work, mawawalan na ako ng boyfriend, mawawalan pa ako ng kaibigan" Kaye said.
Paul Jake, who was also present at the interview, felt the exact same thing. According to him, he initially feared finding out something that he "might not like" about Kaye. However, since they can bring out the best in each other, the businessman-triathlete said, &#8220;I found out na parang she could be my girlfriend naman.&#8221;
Prior to actress, Paul Jake was formerly in a relationship with Melissa Ricks and according to him the biggest lesson that he learned from what they had is openness, in all aspects of the word, especially in admitting when things are no longer working out.
Kaye for her part shared that she learned the importance of trust.
"Ako natutunan ko siguro hindi talagang maghigpit. 'Yung trust talaga. Natutunan kong maging open nalang sa isa't-isa," she explained.
The acclaimed actress, who is now 32-years-old, has had a few longterm relationships before Paul Jake. Her relationship with Lorenzana lasted for three years and prior to that she was in a relationship with Parokya ni Edgar frontman Chito Miranda for seven years.
Kaye recognizes the fact that it is high time for her to tie the knot.
With that she said, "Pangmatagalan ito, Ita-try ko yung best ko na mag-work din 'yung relationship na'to para hindi na rin naman masayang 'yung taon ko."

The 30-year-old actor, agreed that he's also ripe for marriage.
"We are taking it to the next level that's why from friends, we became lovers... I don't know what kind of relationship people are in if they don't see themselves getting married,"Paul Jake said.
The two met and started becoming friends in 2010 on the set of Precious Hearts Romances series Alyna starring Shaina Magdayao and Jason Abalos.
Celebrity