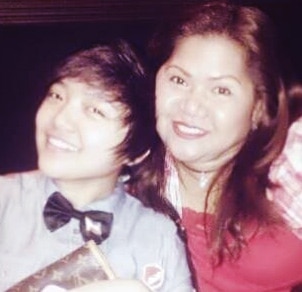 Almost two years into her relationship with partner Alyssa Quijano, Charice has already expressed with certainty where they are headed as a couple. In an interview with Balitang America, the 22-year-old performer revealed that she and Alyssa have already been discussing their future and settling down.
“Lagi naman naming napapagusapan ‘yun,” she began. Even if they are yet to be considered as a married couple, Charice reiterated that they already consider themselves as one.
“…Parang talagang mag-asawa na kami. The way she treats me and the way I treat her and the way na mag-plan kami sa isa’t-isa sa buhay namin, sa future namin. Talagang alam na namin sa isa’t-isa na doon kami darating,” she explained.
The couple have been in the US, Australia, and Canada for Charice’s world tour, and Alyssa made sure she never left the acclaimed singer’s side. According to the report, Alyssa has decided to set aside her personal dreams to become a doctor and a professional singer to be with the former X Factor Philippines judge. “Siguro parang mas okay na ‘yung isa lang sa amin ang nasa showbiz kasi mahirap,” Alyssa reasoned.
It was June of last year when Charice first came out as a lesbian and introduced Alyssa as the woman in her life. Despite some backlash from the public, they became each other’s source of strength.
Charice recently commemorated her coming out via a post on her Instagram account and instead of just celebrating the occasion, she encouraged other closet individuals to show the world who they really are.
“It's been a year since I came out. (JUNE 2, 2013) This day is not just for me but for all the people all over the world who had the strength to come out and be who they are. To others who still feel scared to tell the world, it's okay. We've all been there and one day, you will find the strength to tell everyone. Be strong and always know that YOU, my friend, are not alone. #comingoutDAY” posted the young Kapamilya star.
Celebrity