Maricar Reyes says she and husband Richard Poon have a very happy marriage. 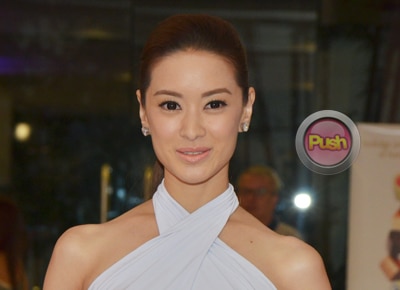 Currently part of the upcoming new teleserye Sana Bukas Pa Ang Kahapon, Maricar Reyes admitted that her newest role as Sasha Bayle, Bea Alonzo's stepsister in the soap, will be her most twisted role to date. The 32-year-old model-actress said working with lead stars Bea Alonzo and Paulo Avelino has been very easy. “Masaya kasi I think they’re very professional and talagang both of them are very giving actors so hindi mahirap mag-react sa mga reactions nila,” she said.
She also admitted that her newest role is an acting challenge for her as well. “Oo may kaba. Actually a month into the serye when we were starting to tape, nahirapan in a way sila direk Jerome (Pobocan) sa akin kasi coming from Honesto, ibang iba talaga ito. Everyday it’s always a challenge kasi lalo na kapag magagaling kung mga ka-eksena mo, nakaka-pressure talaga kahit ano pang sabihin ng mga ibang tao na magaling ka. At the end of the day it’s also up to you eh, if you will deliver. It doesn't matter what kind of role I play, I think both kasi it’s how you play with it I think, how you break the usual mold of kontrabida or underdog. Kung ano ang ibigay sa iyo, depende kung paano mo iibahin,” she said.
As she looks forward to celebrating her first wedding anniversary with singer Richard Poon on June 9, Maricar said her marriage is a very harmonious one. “Masaya naman po. Siyempre nakakabawas ng time together [yung taping] but he’s very understanding and actually the best part of my day is when I go home at three or four or even five am tapos nag-be-breakfast kami together,” she said.
The Sana Bukas Pa Ang Kahapon actress said she has come to accept the differences between her and her husband. “Na-discover ko na magkaiba pala kami [mag-squeeze] sa toothpaste. (laughs) Siya pala yung top, tapos ako yung sa bottom. So it took a while for me to realize, kasi when you live alone you don’t realize those things eh. When I brush my teeth in the morning parang ba’t ganito yung toothpaste? Ay oo nga pala, siya. He’s different form me in that way. And there are many little things,” she revealed.
Maricar said she is learning a lot from being married. “I think marrying really matures you because you have to really consider the other person. Marriage really exposes how selfish you are, how you have to think of another person. Si Richard ano talaga siya eh, he confronts every small thing. Yun yung natutunan ko sa kanya kasi ako if there’s a problem, usually I run from it, ganyan or mananahimik na lang ako. Pero with him I’ve learned na even the small things you need to confront it tapos ayusin niyo. So nag-aaway kami pero on the same day… ayaw rin namin matulog na hindi pa kami bati,” she added.
Having children is also on the agenda, but not while she is working on a teleserye. “Nag-uusap kami. We want to wait at least a year na kaming dalawa lang. Ayokong mag-taping ng buntis (laughs). So saka na,” she said.
The pretty mestiza said she wants to fully rest when the time comes that she will be expecting her first child. “Definitely. I want to focus on being a mom. One at a time muna,” she said.
Watch Maricar Reyes along with Bea Alonzo, Paulo Avelino, Michelle Vito, and Francis Magundayao in Sana Bukas Pa Ang Kahapon starting June 17 on ABS-CBN's Primetime Bida.
Celebrity