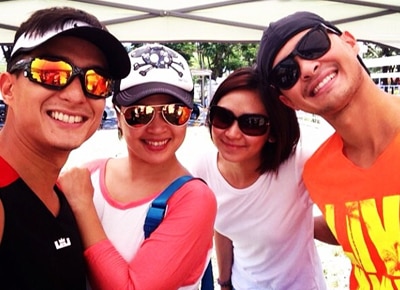 It seems that rumored couple Sarah Geronimo and Matteo Guidicelli have become more open about their special relationship these days as they are once again seen going out together with a bunch of friends.
The friends they recently went out with were real-life couple Judy Ann Santos and Ryan Agoncillo their so-called double date photo was posted by the latter on her Instagram account on Monday evening. "Cheers to Teptep at sa lemonade niya!!! #proudAte," wrote the primetime superstar.
Juday has apparently supported her showbiz baby sister by watching Maybe This Time, the Pop Star Princess' latest movie opposite Coco Martin where she plays the role of Teptep while the latter plays Tonio, as shown by the photo of the movie tickets she posted earlier.
Many AshMatt fans rejoiced over the photo which caused it to have over 7,800 likes and some 310 comments as of this writing.
Fans gushed about the "double date" with many even commenting that Sarah and Matteo are "bagay na bagay" and that they look "so in love."
Recall that Sarah and Matteo were first seen with the Agoncillos some two weeks ago through a photo posted by Ryan on his own Instagram account.
The The Voice Kids coach admitted in her previous interview with The Buzz that she and Matteo did visit Ryan during hone of his races.
She further shared that her Daddy Delfin was with them during that time.
While Sarah and Matteo have both been mum about the status of their relationship, the former recently played it coy about a certain "first time" experience that she has encountered of late.