Ruffa Gutierrez on why her mom won't fight ‘in-laws’: ‘When Chard speaks, my mom listens’ 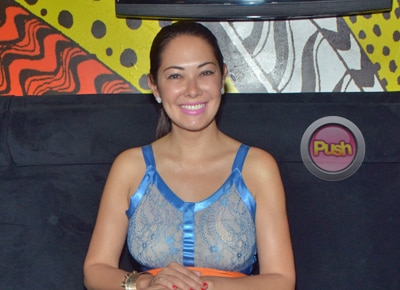 After turning 40 last June 24, Ruffa Gutierrez admitted that unlike previous years, she wanted it to be more low-key this year. “I've had so many little celebrations like friends hosting dinners for me. I had nothing planned this year for my actual birthday. If someone decides to surprise me then I'll welcome that. I just wanted to spend it quietly with my family or kung sino man makaisip na batiin ako,” she shared.
The reality show star said that her birthday wish is more for her loved ones than her herself. “Sana patuloy yung success ng It Takes Gutz to be a Gutierrez, we have a big announcement this week na dapat niyong abangan. Tapos more projects and that the family will continue to be happy and healthy and wala ng away-away and positive lahat,” she shared during a recent spa party held by E! Channel at Beauty & Butter in SM Megamall.
The It Takes Gutz to be a Gutierrez star said their show has been enjoying better ratings with each episode, which may or may not have been helped by the ongoing controversies surrounding their family. “I don't know kung nakatulong or hindi but actually naloloka ako kasi arang pang bida sa episode kagabi si Raymond (laughs). Parang hindi naman kami ni Mommy ang bida sa episode na yun, wala naman masyado si baby Zion. Sabi ko, 'Mond, ikaw na ang pinakamataas na episode na nag-fi-fitting fitting ng mga damit dun sa Phuket!' So I don't know why yun yung pinakamataas na ratings so far but I believe kasi word-of-mouth din, yung mga tao pinag-uusapan and siguro nagpakabit na rin sila ng cable, kumuha na sila ng E! (channel) and natutuwa ako na patuloy na tumataas yung ratings namin,” she said.
When asked to comment about the issue between her mom Annabelle Rama and Esther Lahbati, Ruffa said she would rather not be involved. “Alam mo ayoko siyang pag-usapan, bakit natin siya pinag-uusapan? Well number one, it's their problem. It's not really my problem so bilang kapatid ni Chard (Richard Gutierrez) I support him in whatever he does and kung sino ang mahal niya mahal na rin namin. In fairness to Sarah (Lahbati), she's the same, she hasn't changed. Whatever Richard decides to do kasama na si Sarah and we’re there to support them. I share the house now with Richard and obviously Sarah also stays there and Zion stays there. Bumibisita si [Esther], the last time I saw her was after the party, kaya lahat kami na-shock when she posted that. Sabi ko everything looked fine. Parang napaka-delayed reaction naman 'to. Like everybody was just shocked, even my mom was shocked. And my mom normally kapag may kaaway siya she'll know. Pero parang this time pati siya na-shock,” she admitted.
The reality show star said she has yet to meet the rest of the Lahbati clan aside from Sarah's mom. “I've only met Tita Esther. I haven't seen anyone else from her family except for the birthday of Zion and her relatives asked for photos and I happily took photos with them and met them all. Everybody thought on our end it was a happy celebration and it was positive. Lahat masayang-masaya, natutuwa lahat ng tao kay Zion and it was actually his day. It was all about Zion and kumbaga kami mga alalay lang kami (laughs). Background stars lang kami,” she recalled.
Ruffa said that even though her brother Richard has not been giving statements to the media about his take on the issue, it does not mean he is not trying to help reconcile both of baby Zion's grandmothers. “Well my take on the issue is that I hope that everything will be settled soon and I hope positivity will rule. Hindi naman lahat ng pamilya perfect. There are families that really go through disagreements, miscommunication and our family is no different. Just because we're celebrities doesn't mean we don't have any problems and life is perfect. Sana maayos privately and sana kung may hinanakit man si tita Esther huwag na niyang i-social media. I'm actually proud of my mom because she's been very quiet about this dahil na rin sa request ni Chard. When Chard speaks, my mom listens. Pag ako nagsasalita she doesn't listen, she'll still tweet and she'll still fight me (laughs). Pero pag si Chard minsan lang siya mag-request. Sabi ko himala walang comment from my mom. So nagtitimpi talaga siya. But don't push her buttons because Annabelle is still Annabelle and she's unique in her own way. So hopefully before the issue gets bigger it will just die a natural death at ‘wag nang palakihin pa ng mga tao,” she explained.
Celebrity