Apart from being a successful recording star, actress, and host, Toni Gonzaga ventures into songwriting. 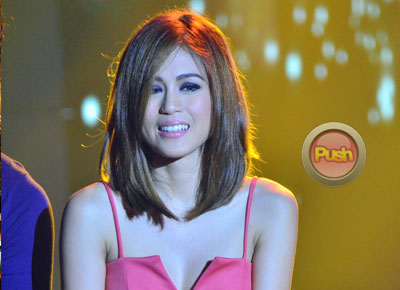 In an interview during the recently-concluded launch of her latest album Celestine, Pinoy Big Brother host Toni Gonzaga proudly shared that she actually wrote the album's carrier single titled “Awit ni Ginny.”
Inspired by the emotions of her character Ginny in her blockbuster movie Starting Over Again opposite Piolo Pascual and Iza Calzado, Toni shared that she wrote the song while filming the project last year.
The song, according to Toni was originally titled “Himlay” but as as per Star Records' Jonathan Manalo's suggestion, they opted to change it to “Awit ni Ginny” because "people might associate the whole feel of the song [doon sa] what I'm going through" which wasn't the case.
"'Yun nga 'yung kinukwento ko kanina, si Jonathan [Manalo] tinawag ako kung may awitin ako eh at that time araw-araw na kaming nagsho-shooting sa set at punong-puno na ako ng emosyon noon kasi we were heading towards the end ng pelikula so intense na sa set, ang bigat-bigat na ng emosyon ko kasi buong pelikula naghahabol ako. I was holding onto a promise na patay na pala, wala na pala," she described.
Toni said that Jonathan's suggestion to write a song came at a perfect time because was able to use everything that she was feeling at that time as Ginny. "Inang [Director Olive Lamasan] would motivate me every single day sa set para lang makuha ko ang whole grasp ng character ni Ginny. Kaya ‘Awit ni Ginny’ kasi sinulat ko 'yun based sa pinagdaanan niya sa pelikula," shared the box office star.
What got the media interested though was when Toni revealed that “Awit ni Ginny” isn't the first song that she wrote. In fact, according to her, she has already written a wedding song. "I have a song that I wrote not for the wedding, but 'yung feeling ko sa amin ni direk Paul (Soriano), not necessarily for the wedding kasi wala pang wedding," Toni explained.
"It was actually a song para kapag ikakasal ako, it has something to do with walking down the aisle and seeing his face and knowing that he is going to be with me for the rest of my life. Parang ganoon," she added.
Toni, who is set to celebrate her eighth anniversary with director Paul Soriano this June, is one of the stars whom the public has long-waited to see get married. Even Mr. Pure Energy Gary Valenciano has apparently volunteered to sing for her big day.
"Nakakatuwa si Kuya Gary kasi sabi niya noong one time we were rehearsing sa 'ASAP,' sabi niya, 'Toni, I want to sing at your wedding.' Sabi ko, 'Kuya Gary, bakit? Hindi pa ako engaged.' Sabi niya, 'Yeah. Wala lang, gusto ko lang in case you are going to get married I would want to sing for you and Paul.' Kasi that's where we met, sa concert ni Gary V. He was directing the Gary V concert," she shared.
The actress-comedienne, who turned 30 last January, revealed in previous reports that her parents are actually "ready" for the prospect of her getting married soon.
Paul, who confessed that the "ball was in his court" was likewise very vocal that proposing to Toni would be his next "big project.”
Celebrity