Luis on marrying Angel: ‘Sabi din kasi namin, once we get married, we still want to explore what the world has to offer’ 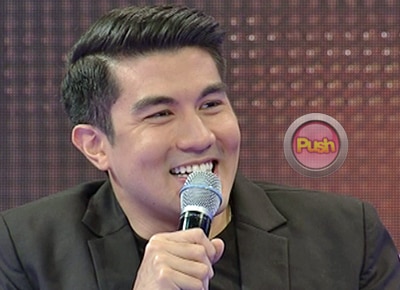 While he still couldn’t supply a projected date for his much-awaited wedding with girlfriend Angel Locsin, host-actor Luis Manzano assured that it’s happening. Albeit not anytime soon.
“In terms of us tying the knot and settling down, it’s still a long journey pero definitely I’m holding her hand every step of the way,” he told his future ninang Kris Aquino during his live appearance on the Sunday episode of The Buzz.
According to Manzano the subject of marriage, they have actually talked about as early as their first date since getting back together last February 7.
“We were having our first date night in Makati, we were eating and we were talking about the future. In a few years, ito ang gusto natin, bahay, saan tayo titira. So after, we were back to eating tapos, sabi niya, ‘Alam mo ba nung first chapter ng relationship natin, we never talk about these things?’ So sabi ko, ‘Okay, the mere fact that we’re talking about these things, means we are here to stay,’” Manzano revealed.
Since the issue of settling down was broached, Aquino then asked for their plans to have kids especially with Darna starring Locsin is slated to be released in 2015.
“Siguro pwede naman to delay. Sabi din kasi namin, once we get married, we still want to explore what the world has to offer. Gusto namin na once everything settles down, to travel, to relax,” Manzano shared about his conversations with The Legal Wife star.
The next question of the Queen of All Media then took Manzano aback. She said, “How can she relax if she’s gonna be a politician’s wife?”
“Wow, well I’m guessing it would be a little more laidback than what she’s doing right now. Maybe, I wouldn’t know,” replied Manzano who noted how the public only sees showbiz’s glamorous side and not the really tough side that goes on behind the camera.
As with his previous interviews, Manzano once again confirmed that he is open to the idea of joining the political scene particularly in Batangas this coming 2016 National elections.
“Pinagusapan na namin with Tito Ralph [Recto] with Mom [Vilma Santos-Recto], with Angel. Honestly we’ve talked about it over dinner, although a very casual conversation,” he recalled.
But he was quick to clarify that the aforementioned people in his life weren’t “influencing" him.
“They weren’t telling me not to run and they weren’t telling me to run. It’s more of ‘what do you want? Where are you at this point in time?’” The Voice Kids host shared.
That is not to say though that he is certainly running for office, he shared, “Sabi ko in two months I’ll decide. I’ll be praying on it. I’ll be thinking on it.”
Celebrity