Bianca Gonzalez is actually ‘happy’ that the public became vocal about the controversial nude painting challenge. 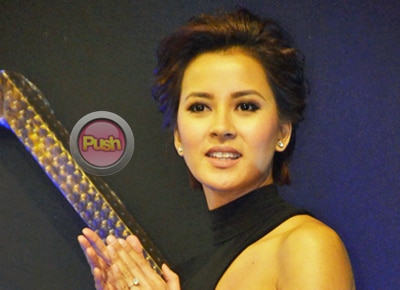 After issuing a public apology a week ago about the “alleged gender-insensitive” nude painting challenge given to Pinoy Big Brother All In housemate Jayme Jalandoni, host Bianca Gonzalez shared that all is now well between the show and the Movie and Television Review and Classification Board (MTRCB).
In an interview with Bianca on the sidelines of the recently-concluded 37th Gawad Urian awards night, she explained that the reality show as well as its executives is one in its desire to abide by the department’s rules.
“Well naayos na ng boss namin sa PBB with the MTRCB kung ano mang naging agreement nila, hindi ko alam ang specifics, but everything naman that will happen in this season and in the future seasons if ever, it abides naman talaga by the rules of the MTRCB and even ABS-CBN’s ethical standards siyempre,” she related.
Yet similar to her co-host Toni Gonzaga, Bianca is not even perturbed by the news. If anything, she says she’s shocked that the task—which didn’t even push through—became an issue at all since they had far more daring tasks in the show’s past seasons.
“But this one, siguro a lot of people who heard about the task hindi nila alam na it was a question eh, yes or no. Although parang in-impose na napakaimportante na mag-yes at magsa-sacrifice kayo kapag nag-no but yes it was basically a yes or no question and at that time meron pang dalawang ‘yes’ ‘yung mga housemates,” Bianca explained.
At the end of the day, Bianca is happy that the public became vocal about the issue because “that means they care, that means nanonood sila which is really what Big Brother is all about—na mapagusapan ang mga desisyon at actions ng mga housemates.”
To the audience who became iffy about the task, Bianca said that the show and the management are taking the housemates’ protection with utmost sincerity.
Meanwhile, Bianca, like Toni, is very happy that their PBB co-host Alex Gonzaga has already ended her guest housemate stint at the famous house.  “Si Toni siyempre ang pinakamasaya bilang ang tahi-tahimik sa bahay nila ng matagal. Everyone who knows Alex ay alam na iba talaga siya. Ang light kasama, ang saya kasama,” Bianca related.
But although Alex is already back at work, Bianca revealed that the younger Gonzaga would be taking on minimal work for now as “gusto ni Mommy Pinty [Gonzaga] na pahinga muna.”
Did Toni ever show how much affected she was by her younger sister’s absence in those two months that she was inside the PBB house? “She didn’t show it naman at work but I know it for a fact kasi imagine sila magkatabi sa kama. Magtakatabi sa kwarto sa kama since birth and ito ‘yung pinakamatagal na nagkahiwalay talaga sila and lalo na itong year they built a separate house, beside lang naman their house, parang bahay talaga nila ni Catherine,” Bianca explained.
She added, “Bagong gawa pa lang ‘yung bahay, as in naglilipat pa lang sila, nung na-stuck na siya sa bahay. Si Toni in that house mag-isa siya. Imagine meron kang talakerang kapatid then one day biglang nawala. Parang hahanap-hanapin mo. So definitely, na-miss niya talaga.”
Celebrity