Dimples Romana on Xian Lim and Matteo Guidicelli: ‘We have grown into better hosts’

Dimples Romana is excited about the new surprises in the newest season of ‘Promil Pre-School i-Shine Talent Camp.’ 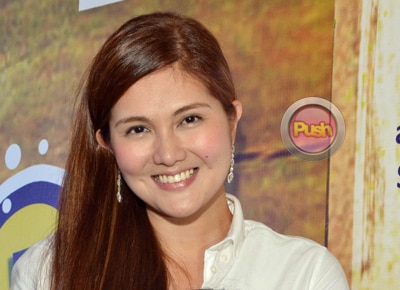 Talent Camp starts at the end of the month, Dimples Romana said she is excited to meet this year's batch of young stars. The 29-year-old host-actress said she is especially proud of two i-Shine Camp alumni who have gone on to bigger things in showbiz.
“On June 28, Talent Camp is already starting. I'm so proud kasi Nathan (Bautista), the i-Shine singer of last season is now in The Voice Kids. He made three chairs turn! My God, alam mo yung feeling pagka-na-witness mo yung pag-start niya, sobrang happy ako kasi in i-Shine naman our objective really is to nurture and really make them see and make them shine while they're still young. So when I saw him perform there parang akong nanay. So I'm super excited for this season kasi whenever I see something like what happened to Nathan parang evidence yun na were doing something right,” she admitted.
Dimples said if Nathan is doing well in singing, i-Shine Talent Camp grand winner Yesha Camile is also getting a big break in acting this year. “Siyempre naman sila talaga bet ko. Alam mo kasi kapag i-Shine kid parang proud na proud ka. Three chair turn siya at pinag-aagawan siya ng tatlo pero ang ending niya sa Team Kawayan siya kasi rakista yung bata eh. Tapos si Yesha our grand winner is in Hawak Kamay with Piolo Pascual at ang kasabayan niya sina Xyriel Manabat at Zaijian Jaranilla. So you can imagine my pride, feel ko na feel ko talaga. So now mas inspired kami to do i-Shine again,” she shared.
Aside from hosting, Dimples revealed she is also excited to get into a different genre this year although she still has to keep mum on the details. “After that I am also doing other things na medyo level up in terms of what I do. Kasi before I used to do a lot of acting in teleseryes and then I shifted to hosting as well. After hosting there's another one that has to do with cooking naman so I'm super excited. Feeling ko mga third quarter of this year pa yun. I really love to cook so it's something that I really want to do kasi I’m Kapamgpangan so by roots mahilig talaga ako magluto and super mahilig kumain. I also took up mga two years sa Enderun ng culinary so my heart is really into cooking since madaldal ako parang nahahaluan na din ng hosting,” she added.
In the show which she started hosting with Xian Lim and Matteo about two years ago, Dimples said she really feels like they have all grown a lot in terms of hosting. “It's funny kasi when we started on this show we were also all starting as hosts. I was also a newbie as a host like them and through the years we've already managed to have different jobs for hosting because of i-Shine so we really owe it to the show for believing in us. As we nurture the gift of the kids, feeling ko we are also nurtured. And you may call it cliché but it's really how it is because they really believed in us while we were starting. Because of their confidence in us we have grown into better hosts. And through the years we will have more drive and learn more from the likes of ate Kris (Aquino) and sina Tito Boy (Abunda). Iba kasi kapag linalagyan mo ng hard work. We all have dreams and we're just so lucky that Promil Pre-School still believes in us. Nagbabago yung mentors pero yung hosts yun pa rin,” she shared.
This season the viewers can expect some new surprises. “The beauty of i-Shine is that it's really growing and leveling up eh. So this time you can expect something good pero I can't reveal it yet. Tatlo kasi yung mentors pero there's two new ones so may isang na-retain sa pagkakaalam ko tapos dalawang bago. Ang saya. Level up talaga. Isang icon batang bata pa pero super, super icon na rin ng mga kabataan. Ngayon alam ko may wild card ata tapos may voting online,” she said.
Celebrity