Exclusive: Ellen Adarna on boyfriend: ‘I don't give him any reason to doubt me’

Ellen Adarna says her boyfriend is supportive of her showbiz career. 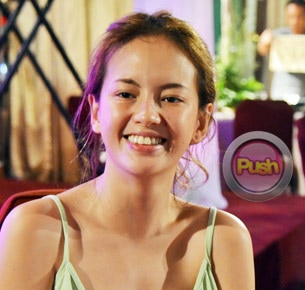 “I'm very happy. I’m actually not surprised because we always work hard for it and the story is really nice so I'm very happy, overwhelmed actually," Ellen Adarna stated when asked about her reaction to the success of her afternoon soap Moon of Desire.
The model-actress relayed that she took an acting class in order to master her role in the soap. "I didn't actually prepare for it until I realized that my character is different from me and when I got on set I was having a hard time so I hired an acting coach. So ayun. Pero ano naman, I'm getting the hang of it 'yung character ko, I’m improving naman so far," she shared.
According to Ellen, joining show business was never part of her plan before. "Honestly it was never part of the plan. I was modeling but with modeling I never took it seriously all I wanted were pictures, I want nice pictures, that's all I wanted."
She revealed that she was about to go back to Cebu before she was offered a role at the Kapamilya network. "I was planning to go back to Cebu when I left GMA. I said, 'You know what I'm just going to enjoy my last six months [in Manila].' When I go back to Cebu I go back to work and then sabi nila, 'Day huwag muna day, try muna natin ABS-CBN.’ I didn't expect anything and then luckily, salamat sa ABS-CBN they gave me a soap," she said.
Ellen shared that she is currently happily in a relationship. Despite living a very public life now, Ellen said that it never became an issue between her and her boyfriend. "He's very supportive and when we got together, showbiz na ako eh, 'yun he can't do anything about and it was never an issue," she said.
She also shared that her boyfriend does not feel threatened by her onscreen partners or by men in show business. "Because he is really secured, I don't give him any reason to doubt me," she stressed.
Celebrity