Bianca Gonzalez shares her fears about getting married

Bianca Gonzalez is hoping that getting married won't put her hosting career on hold. 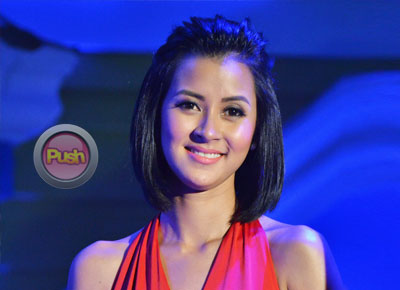 Despite getting a dreamy, movie-like wedding proposal from her boyfriend-turned-fiance JC Intal at the NAIA airport almost two months ago and claiming that she found "no reason to say no," host Bianca Gonzalez opened up about a few qualms that she has about settling down.
While many expect her to fully embrace married life and have kids of her own immediately after they tie the knot, Bianca, in an interview at the Pinoy Big Brother All In press conference, seemed undecided if this is the path that she's willing to take.
"If you ask me at this moment parang hindi kasi siyempre in my head 25 years old pa rin ako so hindi ko pa siya matanggap. But andaming magbabago eh ‘di ba if you decide to have kids so siguro kami as a couple we’ll talk and siyempre ma-affect ‘yung work ko and I have to talk to Tito Boy [Abunda] and Direk Lauren [Dyogi] ganyan," she said adding that, "Kailangan yata ngayon pinaplano na ng smart, hindi pwede ‘yung go lang ng go."
What seems to be a major factor in Bianca's hesitation of sorts was how being a mother would affect her image and therefore her showbiz career, which the Kapamilya host clearly said that she doesn't want to give up. "Sinabi ko nga kay Tito Boy at Sir Lauren na ‘Uy kahit naman may asawa na ako bibigyan niyo ako ng work, ‘di ba?’" She shared.
In addition, Bianca candidly confessed that she’s "scared" as to how getting married would affect the projects that she would be getting in the future. "Oo siyempre kasi new chapter, new image. There will be certain show na hindi ko na pwedeng gawin kasi hindi na bagay sa may asawa, parang ganon. Of course I’m worried. Lahat naman tayo pwedeng mawalan ng trabaho ganon ganon lang. I mean it has happened to me so many times. Sana may work pa rin. Pero tinawanan lang naman ako nila Direk Lauren, so I guess okay pa rin naman," she revealed.
December wedding
Meanwhile, the couple are looking into tying the knot in December, specifically early December. According to Bianca, "only because siyempre ‘yung mga tao mas busy na kapag mas malapit na sa pasko."
As for the details, Bianca said that they have yet to finalize other specifics of their wedding. However she shared that, "But ang na-start palang namin pag-usapan is ‘Sino ba ang gusto mong kuning ninong, ninang?’ ganon palang talaga."
Bianca also revealed that the wedding will be an intimate one. Does it mean that their wedding wouldn't be as publicized as their fans hoped it would be? "Only because hindi naman din kami ganon ka-showbiz and hindi naman ako Judy Ann Santos para gawing ka-major na deal ang wedding. Pero even if ‘yun ang gusto ko. [Pero] siyempre I have to meet him halfway kung ano man ‘yung gusto niya. Pero sabi nila babae naman daw ‘yung madalas na nasusunod so, sana," she explained.
This is not to say that though, that she and JC won't share anything with the public at all. If anything, Bianca said that she would share the date of their wedding probably "after or during" the ceremony.
"‘Yung before hindi ko pa sure kasi if you want it to be intimate paano mo naman ishe-share? We’re not the type rin naman na kala mo sikat sikat ang feeling namin sa sarili namin na kailangan sobrang secret. We’ll plan it as it comes. But siyempre we’ll share what we can. ‘Yung sapat lang. Hindi naman ‘yung feel na feel, hindi rin ‘yung parang secret na secret," Bianca explained.
Celebrity