Coco Martin and Sarah Geronimo shine in ‘Maybe This Time’

Coco Martin and Sarah Geronimo have the onscreen chemistry to make ‘Maybe This Time’ work. 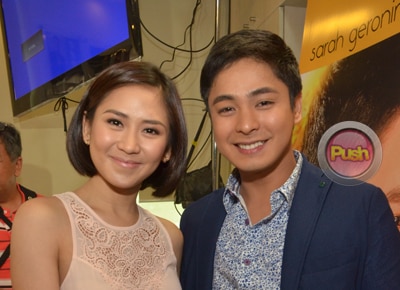 Coco Martin and Sarah Geronimo appear on the big screen together for the first time in Maybe This Time. This latest Star Cinema offering tells the story of how a summer romance blossomed into forever love. Directed by Jerry Lopez Sineneng, Maybe This Time is a story about Steph “Teptep” Asuncion (Sarah Geronimo) and Tonio Bugayong (Coco Martin) who met during the summer of 2007 and fell in love. But their romance was cut short when Tonio chose to leave for reasons he could not tell Teptep.
After seven long years, their paths cross again. But now that Tonio is already dating a new girl named Monica (Ruffa Guttierez), will they still give their love a chance or will they simply choose to move on?
Sarah fully embodied the charming persona of her character, Teptep. Sarah was also a revelation in this film especially during her confrontation scene with Ruffa Gutierrez’s character. Her delivery of lines was sharp, smart, and spot on.
It was refreshing to see Coco Martin showing off his comical side in the movie. Coco suits his character well as the unassuming, uber confident and simpatico Tonio. More than anything else, Coco was brilliant in the movie’s dramatic scenes.
Though this is their first big screen partnership, Coco and Sarah successfully established a palpable onscreen chemistry in the movie. Both were natural as onscreen lovers and were able sustain the romantic connection of their characters throughout the entire duration of the film.
Maybe This Time is now showing in theaters nationwide.
Celebrity