Vice Ganda maintains that he will never say &#8216;anything ill&#8217; about Terrence Romeo 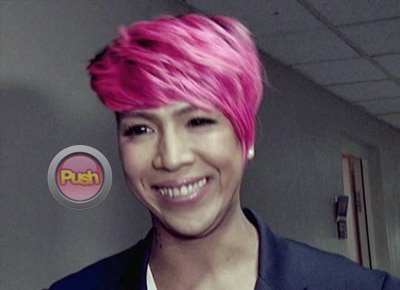 Amid the current heartbreak that he's going through, phenomenal actor-comedian Vice Ganda would rather suffer in silence than spew nasty words against the camp of rumored ex-boyfriend, cager Terrence Romeo.
In a taped interview with The Buzz on Sunday, Vice directly responded to the recent statement made by the GlobalPort cager's camp denying that they were romantically linked.
"Whatever they have to say about me, kung ano man ang gusto nilang iparating sa akin, nasa-sakanila na 'yun. Kung masakit man eh di ako nalang ang masasaktan hindi na ako kailangang mag-react" said Vice.
Terrence addressed the controversy via a recent interview in a sports website wherein he vehemently asked for the rumors about him and Vice to be put to rest.
"Sana matapos na 'yung isyu na 'yan, dahil paulit-ulit lang naman na hindi katotohanan! Isang multo yan ng imahe ko na gusto ko nang mabura totally," he said.
Terrence even appealed to Vice's fans to stop spreading rumors saying that, "Sariling buhay na lang nila yung pansinin nila."
Vice for his part cleared Terrence's name out of the controversy with him even categorically denying that he was in a relationship with the former Far Eastern University star player.
"Never akong nagpangalan. I never clarified, I never admitted, I never confirmed anything. I never said na we were together, wala akong tahasang direktang sinabing Terrence Romeo at wala akong masamang sinabi sa kanya. I will never say anything ill about him" said Vice.
While the two were never seen together, rumors about their ties supposedly began years back, when Terrence was still part of the FEU Tamaraws, a basketball team which Vice ardently supports as an alumnus of the University.
For years, Vice managed to keep the identity of his special someone under wraps by dodging questions about him. However, last May 9, in a typical Vice Ganda manner, the Gandang Gabi Vice host hinted at the ending of his relationship.
"It is over," he said in one tweet while another tweet read, "i TRied but im TiRed. time To Rest."
Although he didn't name names, fans immediately presumed that the capitalized letters on his tweet correspond to Terrence's initials which prompted the latter to react, most especially since a fake Facebook account under the young basketball player's name made derisive comments about the issue.
Speaking of that Facebook post, Vice interestingly shared that he received a call from Terrence apologizing for the said post even if he claims not have done it and the statements he made at the sports website.
"Tinawagan niya ako to clarify and to apologize for what has been said, kung anong lumabas, kung anong nasabi nila. I felt sorry for him kasi napakinggan ko yung podcast. Naawa ako kasi parang napaglaruan sila nung nag-i-interview."
"Kaya nga sabi ko sa kanya 'I never had any doubt na it will not come from your mouth. I knew na hindi siya galing sa bibig mo.' Yung saktong na-quote sa kanya, it was spoon-fed, wala nang nagawa. Naawa din naman ako kasi na-pressure," he added.
Apart from their relationship, another issue that recently cropped up about them is that Vice supposedly gave an expensive car and a condominium unit to Terrence, an issue which the cager&#8217;s father, William Romeo sharply denied.
Instead of fighting back, Vice took the higher road even if he's "not so okay" at the moment.
"I don't have any negative words to say about them. Gusto ko ipagtanggol ang sarili ko pero ayaw kong may taong masaktan at mapahiya kapag lalo ko pang ipagtanggol ang sarili ko. Ayaw kong manakit ng isang taong naging mahalaga sa akin. Ayaw kong manakit ng kaibigan," he said.
Celebrity