Chef Bruce Lim says that support from his family was a big help in making him leaner. 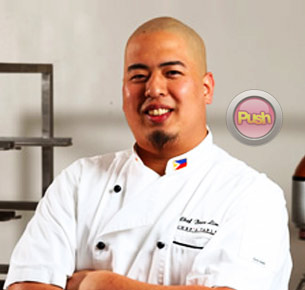 Formerly seen on Kris TV, Filipino-Chinese chef Bruce Lim said he enjoys working on his cable show. He first appeared on television when he hosted segments on Magandang Umaga Piipinas. He later on became the host of Tablescapes together with model-actress and Angel Aquino. “You can still find me on Skycable 22 which is AFC. I have a show called The Boss, it airs on Tuesdays 8 to 9 pm. Tablescapes also airs there as well and then you're going to see me again in our YouTube series. It's going to be fun, cool recipes that everyone at home can cook,” shared the new Electrolux endorser.
Now sporting a leaner, healthier physique, the US-raised chef shared the secret to his diet over the past two years. “I lost a lot, 50 pounds. I was 275 pounds and now I'm about 220 and I've been maintaining that for about a year and a half now. It was just really a change of lifestyle. A lot of people say it's diet, but if you're not strict on your dieting you gain it back. For me, I cut down my carbs, my rice intake and ate oatmeal and exercised so it's really a whole totally different lifestyle change. You have to exercise more, you got to think about healthier things and that's pretty much what I've been doing. I looked really, really big on TV when I was bigger. But now I've lost the weight so I feel a lot better. TV doesn't add 50 pounds (laughs),” he admitted.
Chef Bruce said he also wants to be healthy enough to live longer so he can impart his cooking knowledge to his family. “One thing is I really love about cooking with my family. Even if my kids don't become chefs, I want them to appreciate food and as long as they can cook a few meals they like and save them from the Hunger Games (laughs). My wife does not cook as much but she can bake,” he shared.
When it comes to promoting healthy eating, Chef Bruce said there are a few cardinal rules to abide by if you want to keep the excess weight off. “One is to eat vegetables. Just try it. A lot of people tend to not [eat vegetables] especially in our time that we tend to like eat fast food. Eat some fruits and vegetables. And definitely if you want soup, then stay away from the creamy stuff. Try to go for the clear broth because it has less calories and all that. Secondly try to fill in one meal that's vegetable-heavy, whether it be some type of salad and then cut back on your fat intake. For meat, I know lechon is really good don't get me wrong but I'll go for the lean parts and not so much the skin. I'll probably eat it but I'll probably just work harder at the gym to burn it off. Lastly, cut back on sugar especially in sodas. I used to drink two liters of Coke a day. I could easily drink that in a day, but now I dropped it. Sometimes I don't even drink any Coke, sometimes I'll just drink water or maybe I'll drink two cans a week but I stay away from soda,” he said.