Rumored couple Paulo Avelino and KC Concepcion’s gifts to one another baffle their fans. 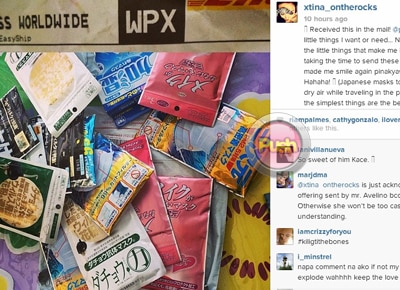 Just when most people thought that their romance had seen its end last month after they unfollowed each other on their various social media accounts, KC Concepcion and Paulo Avelino surprised people with posts on their respective Instagram accounts.
Speculations on the supposed rekindling of their romance began after KC posted a photo on May 13 of a bunch of Japanese goodies which were sent to her by Paulo. The caption that accompanied the photo pointed out how Paulo "knows the little things" that make her happy.
"Received this in the mail! @pauavelino knows the little things I want or need... Not everyone knows the little things that make me happy! Thank you for taking time to send these to the burrrty. You made me smile again pinakyaw mo na kasi lahat! Hahahaha! :) (Japanese masks to avoid breathing in dry air while traveling in the plane. Most of the time the simplest things are the best!!!" she wrote.
She also added, "Hope you liked my gift uyyyy hahaha HAPPY BIRTHDAY" with the hashtag #happylangangpeg.
The post has over 2,900 likes as of this writing and some 200 mixed comments from their fans. While some felt "kilig" over Paulo's gesture, others thought that it was a "one way kilig" on KC's part.
User yaz626 pointed it out and wrote, "I don't mean to sound nega, but has Paulo responded to KC's tweet or this IG post? Parang one-sided kilig lang. Folks, let's not assume. I just like it that KC is somehow still being friendly no matter what it is they have cuz (sic) we sure don't know the real deal."
Other fans even gave some advice to the actress-singer saying that she should learn to take things slow.
Benjhoney wrote, "@xtina_ontherocks I have nothing against Paulo but please don't be in a hurry especially [when] you are looking for someone that you want to spend with for the rest of your life. Just enjoy life first until the right man comes at the right time."
While Kilimajara1 opined, "@xtina_ontherocks sana you think bago ka makipagrelasyon sa isang masyadong on and off! And won't hesitate na ilaglag ka! I wanna be happy for you but i'm afraid i'm more scared for you. Please learn from the past!"
Instagram user Nosey said, “kalurkey on the other hand seem to have seen the post way too negatively than te rest as he wrote, "Parang pinaglalaruan lang si @pauavelino hahaha."
KC took to her Instagram account to express her admiration for the Kapamilya star, as Paulo, for his part, confessed that the 29-year-old actress is “inspiring” him.
It was revealed on national TV that he and KC are dating albeit non-exclusively .
Celebrity