Lino and Fille Cayetano are now parents to a baby boy whom they call ‘the little one.’ 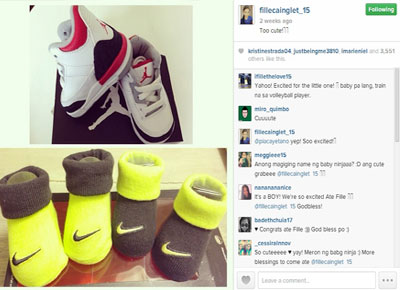 Kapamilya director Lino Cayetano is now a father. The Ipaglaban Mo director announced the arrival of their first child on Tuesday, May 13 via his Instagram account. While Cayetano, in a recent interview with Push.com.ph, played coy about revealing more details about their child, his wife, Fille Cainglet, posted on her Instagram two weeks ago a photo of a pair of baby Jordan rubber shoes and some Nike baby booties which seemed to have hinted that what they were expecting a baby boy.
The director-turned-politician had earlier revealed that they were expecting their eldest child to arrive “later this year.”
Cayetano married the former star player of the Ateneo Lady Spikers December last year in an intimate beach wedding in Cebu.
In the aforementioned Push report, Cayetano explained how he felt that Cainglet was “the one” even after only a few months of dating and a month-long engagement. “We had a honeymoon wedding, very small wedding pero ginawa namin out of town with family, parang family only so in that way na-enjoy rin namin ‘yun. It was just a few months after Yolanda so we wanted a simple wedding, but also kahit papaano since it's a smaller wedding we were able to do it out of town so parang all in one na the honeymoon and all,” he recalled.
Celebrity