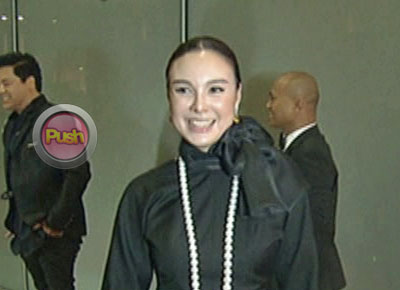 The war against Claudine Barretto has seemingly been reignited after she came out with new and explosive claims on Buzz ng Bayan’s Sunday episode against her estranged husband Raymart Santiago and older sisters Gretchen and Marjorie Barretto.
But the three are obviously not making Claudine get away with it as they too aired their side and countered her claims which was started by Marjorie via a statement which was also read on the same Sunday episode.
In her statement, Marjorie said that, contrary to what Claudine speculates, the decision to bring an ambulance to the former Kapamilya star’s house in 2010 was not hers or Gretchen’s decision alone but was actually their parents: Inday and Miguel.
In addition, young star Julia Barretto’s mother likewise slammed how Claudine was “making it seem” that she loves her children when according to her the embattled star never even came near her kids and even “tried to destroy” them before.
Meanwhile, in a report aired on TV Patrol on May 12 Gretchen, even if she’s currently in Thailand, responded to the claims of her youngest sister.
According to Claudine, the former Princess and I star called her names such as “lechon” and “baboy,” among others and belittled her within the hearing distance of her kids and her husband.
Gretchen, despite Claudine’s plea for her not to speak about her again, in her statement, claimed that she didn’t utter the words that her sister claims her to say.
"How do I debate with one who is clearly hallucinating and is under the influence of drugs and is suffering from severe mental illness? I am not one who would utter words such as 'baboy,' 'lechon,' 'laos' at 'magpakamatay ka na.' I never spoke ill or cursed Sabina nor Santino," Gretchen said.
She added, "I have yet to hear Claudine and her mother and father speak the truth for once. Their current situation and lost relationships should speak volumes of the kind of character and attitude they possess."
Raymart, for his part, also addressed the issues raised by Claudine via his counsel Atty. Ruth Castelo, in an interview aired on the same TV Patrol episode.
Celebrity