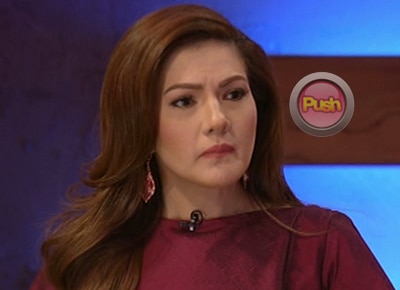 Host-actress Carmina Villaroel didn’t mince her words that she was shocked and actually “clueless” over the fact that her husband was been charged by the Bureau of Internal Revenue (BIR) with tax evasion last Thursday.

Carmina took to her show Buzz ng Bayan’s Sunday episode to air her reaction about the current issue being faced by her husband.
“Pati ako naloka. Thursday lumabas 'yung issue. That day, naguluhan din kaming dalawa ni Zoren. Hindi rin namin alam what went wrong because nagbabayad kami ng buwis ni Zoren. [Prior to that], wala talagang [indication] that’s why we were clueless. Talaga kami ‘Ha, anong nangyari?’ Malinaw kasi sa amin na nagbabayad kami. Nag-panic kami,” she said.
According to her, upon learning about the charge, her husband immediately responded by sending his secretary and accountant to settle the matter with BIR.

Recall that Zoren, in a recent Push.com interview, didn’t even express a bit of dismay over the weighty BIR charge even saying that “Wala naman akong sama ng loob, wala akong galit sa kanila. I know they're just doing their jobs.”

The father of two is currently facing a P4.45 million tax evasion charge filed by the BIR for supposedly failing to properly file his income tax for taxable years 2010 and 2012.
In the alpha list of withholding agents obtained by BIR, the department learned that his total income for 2010 is P9.64 million and P6.49 million in 2012.
"We were provided copies of Legaspi's ITR [income tax returns] for the years 2010 and 2012. A comparison of the documents and information at hand showed Legaspi declared as gross income in his ITR filed with the BIR P6.79 million in 2010, when it should be P9.64 million. And in 2012, P1.82 million when it should be P6.49 million," she said.
"He substantially underdeclared his income tax by 42% in 2010 and 256% in 2012. We are assessing him with total income tax liability for taxable years 2010 and 2012 for total of P4.45 million," BIR commissioner Kim Henares said.
The case against Legaspi is the 240th filed under the BIR's Run After Tax Evaders (RATE) program under President Noynoy Aquino's administration.
Apart from Zoren, the BIR had also recently filed tax evasion charges against other high-profile figures such as controversial businessman Cedric Lee and former Philippine Medical Association President Leo Olarte before the Department of Justice.
Celebrity