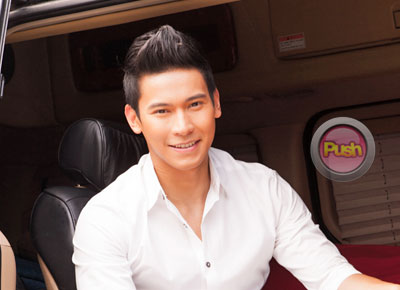 Enchong Dee teamed up with Liza Soberano for the first time in an episode of Maalaala Mo Kaya last Saturday, April 5. For Enchong, working with a young actress like Liza was "refreshing" and taught him to become a better leading man.
"It's refreshing to work with someone who's really, really, young. Siyempre kailangan mo alagaan, kailangan mo ingatan, kailangan mo gabayan kasi nga hindi naman siya six years old nag-start [sa showbiz] so ‘yun lang all of the sudden you become more of a leading man, ‘yung leading man na aalagaan mo even outside the camera," he said.
As the more experienced actor, Enchong shared some advice with Liza, one of which was how to deal with her bashers. "Alam naman natin na KathNiel has a very massive fans and mahirap talaga if you're partnered as a third lead sa kanila,” Enchong said. Liza starred with Daniel Padilla and Kathryn Bernardo in Must Be Love and Got To Believe as part of the love triangle. “It’s understandable na kung mag-support ang mga fans na ‘yun sobra-sobra and I understand where she’s coming from. Hindi maiiwasan na may masabi na mapag-initan kahit wala namang ginagawa,” Enchong continued.
The actor relayed that he could relate well to Liza. “Kinukwento ko lang sa kanya na when I’m starting ganon ang position ko with Kim (Chiu) and Gerald (Anderson) na alam naman natin na sila ‘yung Teen Queen and Teen King sa mga panahon nila. So sabi ko sa kanya just be nice to everyone and one day they will realize you’re not that person na akala nila ikaw ‘yun and sabi ko just be patient and one day you will have your own love team and someday I’m sure that she will become an Anne Curtis,” he stated.
Enchong remarked that Liza will have a very promising career. "I started at the age of going seventeen, sabi ko sa kanya, ‘You're more successful than I was before so you have a long way to go,’" he said.
Catch the behind the scenes of Enchong and Liza’s MMK activities last week in iWant Stars Enchong app powered by ABS-CBN Mobile.
Celebrity