Gary V on Sam Concepcion: 'He's one of the most underrated singers' 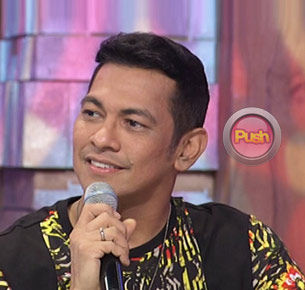 Not only does he think that young actor Sam Concepcion is his heir apparent, but according to Gary Valenciano, even his sons see the same potential in the Mirabella star.
"Yeah. Even Paolo my son, siya 'yung nag-direct nung concert ni Sam Concepcion sa Music Museum and sa presscon namin he told the media na 'I see in Sam Concepcion the way I see in my Dad,'" shared Gary during his live appearance on the Sunday episode of Buzz ng Bayan.
"So I think it's not just the performance, I think it's also in the way he was," he added.
Why Sam?
"There was one time, si Gabriel, my other son, producer na siya ngayon, sabi niya 'Dad narinig mo naba 'yung kanta ni Chris Brown 'yung may puro effects sa boses? Dad, narinig ko si Sam na ginagawa niya 'yun kaso walang effects 'yung boses. Ginagawa niya talaga,'" he narrated.
In fact, according to the iconic performer, Sam is "one of the most underrated singers" in the county, "which is why I made him part of the show because sabi ko dapat may isang marunong sumayaw, marunong kumanta."
Mr. Pure Energy is celebrating his three decades in showbiz this year and he's marking it with a concert titled Arise which is happening on April 11 and 12 at the Araneta Coliseum.
Over the years Gary has managed to stay relevant despite the surge of new and younger performers readily taking the spotlight and this he does by "knowing what the issues are with people."
"Kapag pumupunta ako sa isang lugar o sa isang corporation, anything ginagawa ko, I try to make it a point to know what people are going through in that particular place. Who's my audience and ano ang edad ng mga manonood sa akin and gender," he explained.
Does he have fears of being replaced by a younger performer one day?
"No I'm excited about them, like Daniel Padilla. I asked him one time before, 'Daniel nagsusulat ka ba ng mga kanta?' Sabi niya 'paminsan-minsan pero ano eh hindi ko matapos.' I told him, 'Don't throw away the somgs, that could be your biggest asset. 'Yan ang magiging autograph mo sa puso ng mga fans mo," the award-winning singer claimed.
His concert Arise is happening on April 11 and 12 at the Big Dome with guests like Sarah Geronimo, Sam Concepcion, Rico Blanco, AKA Jam, Maneuvers, G-Force, Iya Villania, Gab Valenciano, and Kiana Valenciano. Benefits of the show will go to the victims of Typhoon Yolanda.
Celebrity