Doug and Cheska Kramer shrug off competition among celebrity parents

Doug and Cheska Kramer have no issue with other celebrity parents taking on the ‘team’ tag. 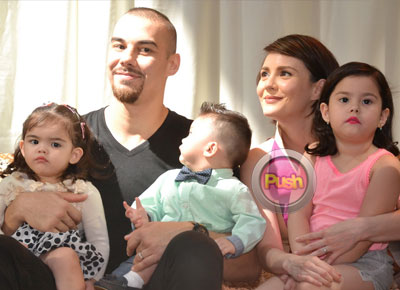 “Actually hindi namin ine-expect na ganito kadami and we’re very thankful for that. They have been very patient na rin all those who have stayed. Thank you to all our fans who have been supporting us and following us and who love our family most especially our kids,” she said.
What led to their Meet and Greet according to the basketball star was a promise that he previously made to their thousands of fans on their family’s Facebook Fanpage. “Well it was a promise I made to the fans when we hit 200,000 likes, I said when we hit 500,000 likes, I’ll do everything to gather a meet and greet venue. And ngayon halos nasa 840,000 na tayo so in less than one year palang ‘yung site. This is our way of thanking everyone,” said the head of the Kramer family.
While they repeatedly underscored that they never really imagined that their family would ever become online “superstars” only after months of sharing photos and videos of their kids online, Doug surmised that their strong fanbase is a testament as to “how they probably long to see a family that’s very intact and a beautiful family that they can actually look up to in terms of parenting styles and how we bring up our children.”
Would they be open to doing a reality show? “We’ll see. We can never say no. But in terms of everyday like following sa camera. No, definitely not. We’re willing to do it maybe once or twice a week na taping just a few hours a day. I don’t want to overwhelm the kids,” Doug said.`
Cheska emphasized that they are fully aware that their kids are still very young to fully join show business. “I don’t want my kids to feel pressured at such an early age. Tsaka they’re at that stage when we’re still teaching them a lot of things. We’re building up their personality, their morals and how with these people parang na-o-overwhelm sila eh. Hindi nila minsan ma-grasp na, ‘why are so many people taking my pictures?’ Kendra’s only four, Scarlett’s only two, Gavin’s only one,” she explained.
To fans who are probably wondering if they plan on adding to their brood, Doug replied in the negative.
Meanwhile, with their fanbase growing by the day and their show appearances trending on social media every single time, Team Kramer has inspired a lot of other celebrity parents to start their very own “teams” and Doug and Cheska have no issue about that.
“Okay lang, everybody can do whatever they want to do. Kami naman we’re not owning the ‘team’ [tag] just as long as you’re a team that can inspire. You’re a team that promotes good values basta lahat good. It doesn’t matter,” she said.
Celebrity