Daniel Padilla admits being a role model is difficult

On Aquino & Abunda Tonight, Daniel Padilla talked about “Dos” and his struggle not to lose himself because of fame. 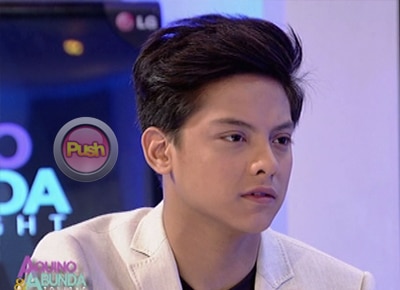 On Aquino and Abunda Tonight, Daniel Padilla said he is ready for his concert entitled “Dos” at the Araneta Coliseum on April 30.  He will be singing with one of his all time favorite singers Rico Blanco. Daniel said Rico Blanco has been his idol even as a child.

Daniel is aware that some people don’t commend his singing talent. No matter though, Daniel said he doesn’t let other people’s criticism of his singing get to him as long as he knows he makes a lot of people happy. However, he admitted listening to his Mom’s feedback on his career and projects.

Daniel also said it is difficult being a role model and being looked up to by a lot of kids. But he said that even so, he takes care not to lose his true self despite the pressure of being a teen star.
When asked if he is willing to convert to Iglesia ni Cristo because it is Kathryn Bernardo’s religion, he said they’re still too young to decide on something as serious as that and that he still has to open himself up to learning a lot about the different religions.