Alex Gonzaga on Ryan Bang as her persistent suitor: ‘He can knock’

Alex Gonzaga laughs off issues about being in the shadow of her sister Toni and reveals who among her suitors she’d want to be alone with inside the PBB house. 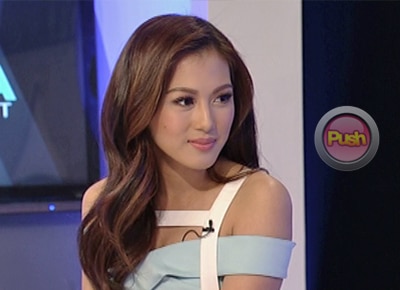 On Aquino and Abunda Tonight, Alex Gonzaga laughed off the issue that she and her sister Tony Gonzaga are being “sold” as a package. She told Boy Abunda that although they do hosting projects together, they each have their own projects. The hosts of the show agreed with Alex. Kris Aquino said Alex and Toni complement each other while Boy said the two have different rhythms and that Alex brings out the fun part in Toni. Alex cheekily agreed, “Oo, kasi masyado na siya, minsang dull.”
Boy also asked Alex about three men who are supposedly courting her, namely: Kean Cipriano, Ryan Bang, and Arjo Atayde. Alex said, “The doors are (momentarily) closed,” for her suitors. She denied having a recent painful experience but that she “needs to be alone right now.” When asked about Ryan who seems to be Alex’s most persistent suitor, Alex joked, “Hindi ko rin naman siya masisi” and that “he can knock.” Alex also said that if there is one person she’d want to be alone inside the PBB house with, it would be Ryan because they’re really friends.
Alex also shared that there was once a guy she was fond of but that “nakatuwaan ko pa lang siya, kinancel na kagad siya sa utak ng parents ko.” She chose to be obedient to her parents, but she said she didn’t regret her decision. “‘Pag ayaw ng parents may meaning behind it, may discernment sila.”
Pinoy Big Brother All In will kick off on Sunday, April 27.