Julia Barretto on being a role model for the youth: ‘Show them who you really are’

Julia Barretto says she wants to always maintain having a positive image in showbiz. 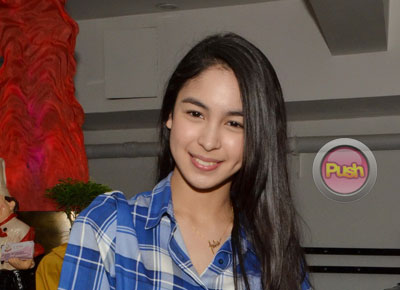 Now that Mirabella has started airing on ABS-CBN, Julia Barretto said she hopes to become as good an actress as her aunt Claudine. “I idolize her acting. No doubt she’s one of the best talaga and also the movies, the teleseryes, yung story niya and the way she portrayed every role, the way she acts, parang ‘pag comedy comedy, ‘pag drama drama, parang she can do everything and I admire that about her,” she shared.
Julia said she almost thought about quitting showbiz altogether after the delay in releasing her first project. “I think that was the time na ni-launch ako as Cofradia pa. Parang it took so long tapos yun pala there was a problem na yung feedback ng mga tao parang it’s such a sensitive story sa mga tao so ayun, siyempre medyo na-shelve yun tapos medyo nawalan ako ng hope. And then thankfully naman Dreamscape came up with an original story which is Mirabella and I’m so thankful for that. Kasi they could’ve just not have pushed through with anything but they still blessed me with a launching project,” she said.
The 17-year-old actress said it was definitely worth the wait for her launching soap. “I guess matagal ko na itong pangarap and I don’t want to give up on it and I feel that with prayer anything is possible naman so that’s just what I did,” she admitted.
Julia also had to learn to deal with bashers online which she said taught her to be a stronger individual. “Siguro yung strength ko coming from God and my mom, ang dami ko ring natutunan sa kanya and I learned na parang giving them the attention they don’t deserve is just a waste of time. Parang I don’t want to let myself down. I’d rather look at comments that will uplift me and that will encourage me to be a better person,” she explained.
Julia said she also appreciates not being given any special treatment at school. “Wala namang ganun kasi it’s a program talaga for actresses, commercial models, for national athletes so we all go through t the same stuff, they are the stars in their own fields, kunyari in their own sport, sa mga passion nila, parang walang special treatment,” she added.
Even as a fast-rising celebrity and one of the most popular teen endorsers in the country, Julia said she won’t let the fame get to her ego. “I’m an ordinary teenager, it’s just that I get to work everyday,” she added.
The Mirabella star said she wants to be a good role model for the youth and shares how she plans to do it. “By sending a good message still, just being myself, being transparent. I think that’s how people will learn to love you and learn from you if you’re true to yourself, if you show them who you really are, kasi you can’t fake it, ‘di ba? So if they see that you’re being yourself and you’re sending a positive message, that’s the only way,” she said.
The pretty mestiza said she believes that the youth of today are an important sector in society which is why she wants to help empower them to do better just like her. “Just like me we go for the things we want to get, like our dreams, what things we are passionate about, we don’t just give up, we do something about it and I think that’s what’s good about this generation. That’s what it should be for the coming generations as well so that’s what I like about it. Before you thought you had to be old enough to achieve something but I’m just 17 but we’re able to do the things that we want to do,” she said.
Celebrity