Aiza Seguerra and Liza Diño to wed this year

Aiza Seguerra and Liza Diño say that a reception for their friends and family in the country is slated to be held early next year. 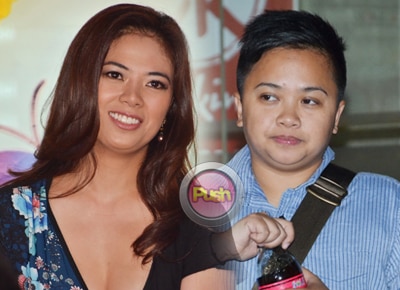 While couple Aiza Seguerra and Liza Diño are still in the process of sorting out details about their upcoming wedding, they revealed that the ceremony would be happening later this year. This announcement came almost two months after the Be Careful With My Heart star popped the question to her partner of more than a year.
"We're still finalizing things. [But] our marriage in the States will happen this year. Siguro by the end of the year. 'Yung ceremony with family and friends here, first quarter of next year," Liza said during the grand press conference for Mirabella.
While they didn't reveal which state in the US they are flying to, the couple happily shared a few details of their dream wedding.
At this point what Liza is most thankful for about their upcoming wedding is that they both want the exact same thing. "I know this is so going to be cheesy... kasi we both like the same thing.  Hindi namin pinaguusapan pero sinabi ko sa kanya na ang gusto kong wedding is very rustic. Ayoko ng masyadong stiff and ganun 'yung gusto niya. Ako dream wedding ko is to be with family, nakuha ko na 'yon. Gusto ko intimate and I think that's our plan,” Liza said.
The idea, according to the couple, is to have an intimate wedding abroad and a big reception here with some 300 guests. “Since medyo nagiging public na 'yung relationship namin ngayon we want to be with the people who really supported and really loved us. Sa awa ng Diyos ang dami namang taong ganyan sa amin,” Liza explained.
The chef-turned-actress further revealed that they’re actually hoping to have an out-of-town wedding with “maraming puno, very natural. Even if may flowers ayoko ng parang arranged sya. Gusto ko parang binungkos lang siya.”
What would be the motif of their wedding? “Earth tones. Pero siyempre kasi I love Flamenco eh that's one of the things I'm very passionate about. That's also one thing that describes us both so may touch of red."
While they both like the same thing for their wedding, Liza joked that Aiza is actually more particular than her. "Si 'Groomzilla’ ang tawag ko sa kanya [Aiza], siya kasi yung particular eh. Kasi ako, I never experienced being proposed to. I never experienced going down the aisle na talagang buong pamilya. I got married in Las Vegas, so talagang it was very different," she said.
Aiza, who was also present during the interview, affirmed the monicker and shared, "Nagte-text ako sa kanya kung anong ilaw ang gusto ko, kung anong bulaklak." Liza then piped in, "Pati centerpiece, meron 'yan [peg] si Aiza, souvenirs, anong look. I think pareho kasi naming pangarap 'to eh to have this really happen." The singer-actress then said, “More than anything, it's not just the getting married part that I am excited about. It's me getting married to her."
As for their entourage, Liza shared that they have yet to ask some people, but so far they have asked Sylvia Sanchez to be part of their principal sponsors. “Isa pa lang talaga ang nakausap namin, si Nanay Ibyang [Sylvia Sanchez]. Siya rin ang pipili ng ring. Ever since and even before I proposed, she was really there talaga. She gives us advice," Aiza said.
Their principal sponsors, according to Liza, would be composed of  "May mga tao na, ever since, nandiyan sila nung start pa ng relationship namin.”
Will there be others coming from showbiz aside from their Nanay Ibyang?
“Hindi maiiwasan na yung iba, taga-showbiz, dahil kay Aiza,” said the Mirabella star.
Celebrity