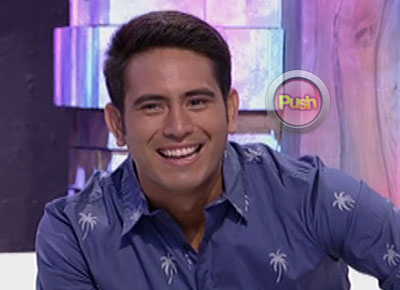 Gerald’s father, Randy and brother, Ken, in a rare occasion, appeared on the live Sunday episode of Buzz ng Bayan and expressed their approval of Maja.

Ken even noted that his relationship with the Dahan Dahan singer is “Parang brother and sister” and that he considers her his Ate.
The Dyesbel’s father on the other hand called The Legal Wife actress a “sweetheart” and shared an anecdote of what she did just last year.

“Well I first met Maja back in Christmas just last year and at that time I was still overseas. I was working she really endeared herself. She really charmed me. She said ‘Daddy come home. You need to come home,’” he shared.

The older Anderson noted that the aforementioned gesture proved how much a “caring person” Maja is. He also added, “She’s a sweetheart. I think the world loves her.”

Gerald, who celebrated his 15th birthday last March 7, for his part was grateful over such statements about his girlfriend.
According to him he had a simple birthday celebration which was initiated by none other than Maja herself.

Prior to his birthday though, rumors of the couple’s split made rounds online lately which allegedly started during Valentine’s Day when none of them posted any happening on their respective Instagram accounts.

The two has since denied any truth to such rumors and even claimed that their relationship as of this moment is very much okay.
Are you bothered by persistent rumors that you’re over?

The Kapamilya hunk even added that they don’t let it affect them by not speaking about such negative issues.