Filipinos can relate to the family drama in the play 'August: Osage County' 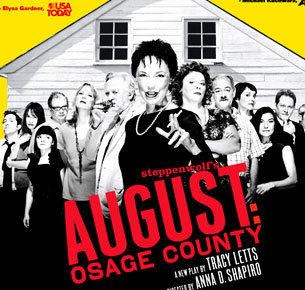 Some of the most notable names in Philippine theater came together in a tour de force performance in Repertory Philippines's recent staging of August: Osage County. The Tony and Pulitzer prize-winning play revolves around the lives of the women in the Weston family. The recent Hollywood version of the film starred Hollywood heavyweights Julia Roberts, Meryl Streep, Ewan McGregor, and Benedict Cumberbatch. The local adaptation is a veritable who's who of Philippine theater as it is headlined by Baby Barredo, Pinky Amador, Liesl Batucan, Sheila Francisco, Tami Monsod, Richard Cunanan, Leo Rialp, and Angeli Bayani.

In this story, retired poet Beverly Weston (Leo Rialp) hires a Native American  (played by Ilo-Ilo star Angeli Bayani in her first production with Repertory) to be the live-in caregiver of his wife Violet who is battling oral cancer. Theater royalty Baby Barredo is a force to be reckoned with onstage as she commands both sympathy and fear in equal parts as the fiery yet slowly deteriorating matriarch who is gets increasingly worried about her alcoholic husband who suddenly goes missing. Her three daughters Barbara, Ivy, and Karen end up going to their childhood home to face their different issues with each other and more family drama ensues.

Pinky Amador, who was last seen on the Kapamilya network in the Maalaala Mo Kaya episode Family Picture last year, shows she is adept on stage as she is on television as Violet's eldest daughter who brings along her estranged husband Bill (Kenneth Moraleda) and their only daughter Jean (Thea Gloria). Sheila Francisco, the only Filipina to have performed at the prestigious Royal National Theater of London, plays Violet's sister Mattie Fae and steals the scene whenever she takes center stage. Richard Cunanan plays her husband Charlie who provides some comic relief in this gripping three-hour drama. Their son “Little” Charles (Noel Rayos) is an underachiever who has a secret which will eventually scandalize his mother and the rest of the family.

The ensemble performance by one of the oldest theater companies in the country is a wonderfully knit web of individual stories. Pinoys can certainly relate to this dysfunctional Southern family which also have their moments of drama, tragedy, and its own share of deeply hidden secrets.