Piolo Pascual admits he was about to quit showbiz this year

Piolo Pascual revealed that he was about to settle down for good in the US this year but the success of Starting Over Again has changed his mind. 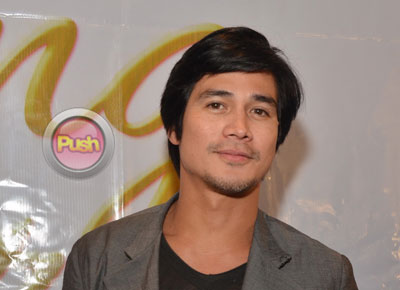 An emotional Piolo Pascual admitted during the victory party of his recent blockbuster movie Starting Over Again that he was already planning to quit show business this year. “I was seriously considering quitting this year pero when the movie became a big hit, I said the joke is on me. I guess hindi pa po time para umalis ako sa showbiz,” he stated.
He further revealed that he had already made the decision to live in the US for good. "Inaayos ko na po ‘yung buhay ko. I was ready to settle down in the States so when I did the film sabi sa akin ano ba ang motivation mo? When I told Inang (director Olivia Lamasan), 'Nang wala po akong mabibigay kasi wala na akong pinanggagalingan.’ I'm so at peace knowing na this could be my swan song, this could be my last,” he shared.
The success of the film came as a surprise to Piolo that he considered it as a sign that his time in showbiz is not over yet. “Nong lumabas po na ganun kalaki ang kinita ng pelikula, hindi talaga ako makapaniwala because back during my time, maka-100 million ka lang, okay ka na, nakatawid ka na,” Piolo said.
He added, “For the movie to make P100 million in three days, it was so overwhelming for me. I just never thought na it could still happen. Sinasabi ko na okay na ako pero ‘yun pala, may plano pa pala ang Diyos.”
With recent turn of events in his life, Piolo remarked that he’s now all leaving it to God and to the management when it comes to where his career goes from this point forward. “I think I'm not in a position to say na hanggang dito na lang ako. I thought kaya kong tuldukan, hindi pa pala. Bahala na ang Diyos, bahala na ang ABS-CBN.”
Piolo has extended his gratitude towards the ABS-CBN executives for believing in him. “You guys never lost hope. Thank you for not giving up on me,” he said.
As of March 4, 2014, Star Cinema has announced that Starting Over Again has already earned P375 million in box office sales.